Deal reached ‘in principle’ in bid to avert new US shutdown

Agreement over border wall funding, ICE detention must still be signed off by Trump 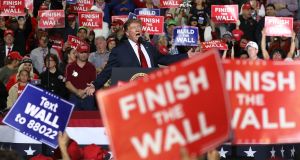 Democrats and Republicans reached a tentative agreement on Monday evening that could avert a government shutdown at the end of this week, but it remains unclear if US president Donald Trump will endorse it.

Lawmakers from both parties met in Congress on Monday evening in a last-ditch attempt to find a bipartisan solution to the funding impasse which threatens to shut the government on Friday if spending bills are not signed.

According to members of Congress present at the meeting, agreement was reached “in principle” on a deal. It includes $1.375 billion (€1.22 billion) for a physical border - far less than the $5.7 billion (€5.05 billion)demanded by Mr Trump for his proposed wall with Mexico. The agreement also envisages a reduction in the number of migrants that can be detained by Immigration and Customs Enforcement (ICE) officers, a key demand of Democrats and an issue that had led to the breakdown of talks over the weekend.

But the agreement must still be signed off by the US president. Asked if the White House would back the deal, Republican senator Richard C Shelby said “we think so; we hope so.”

The apparent breakthrough in negotiations in Washington took place as Mr Trump held a rally in El Paso, Texas. Flanked by enormous red banners with the phrase “Finish the Wall,” Mr Trump told the crowd: “Today, we started the big beautiful wall right on the Rio Grande,” a reference to the river that separates the United States from Mexico in Texas.

Responding to chants of “build that wall,” Mr Trump said: “You should say ‘Finish the Wall,’ because we’ve got a lot of it built already.”

But he appeared to suggest that he was not open to compromise on the need for a full border wall.

“As I was walking up to the stage, they said that progress is being made with this committee,” he said during his speech. “Just so you know, we’re building the wall anyway.”

He also referenced Democrats demands to cap the number of immigrants that are detained by ICE officers.

“I will never sign a bill that forces the mass release of criminals into this country,” he said.

In a free-flowing speech he claimed that 60,000 people had applied to attend the rally, but only 10,000 had been permitted to enter. “Is there anywhere more fun than a Trump rally?” he said to cheers.

His speech also touched on abortion, as he denounced Democrats for supporting what he called “extreme late-term abortion,” as well as the controversy surrounding Virginia governor Ralph Northam who has been accused of racial insensitivity following revelations that he previously appeared in “blackface.” “I like him. Keeps us out of the papers,” he said of the beleaguered Democrat.

Similarly, he returned to some of the themes of his state of the union address last week.

“America will never be a socialist country,” he said. “We will live free, we will die free. We will always be free.”

Mr Trump also mocked Beto O’Rourke, the Democrat from El Paso who is widely believed to be considering a run for president in 2020.

The former congressman held his own rally less than a mile away from the El Paso County Coliseum where Mr. Trump was speaking. “We stand for America and we stand against walls,” Mr O’Rourke said as he addressed a crowd of about 10,000 people.

The US president has repeatedly claimed that crime in El Paso plummeted after the construction of a border wall near the city, a claim that local officials have denounced. During his rally, Mr Trump said that the city’s leaders were “full of crap” by claiming that a wall did not reduce crime.

All eyes will be on the White House on Tuesday and Mr Trump’s response to the congressional proposal amid fears that the US government is heading for another government shutdown on Friday if new funding legislation is not agreed. It follows a 35-day shutdown - the longest in history - which ended last month after Mr Trump agreed to sign a set of bills without funding for his border wall.

Mr Trump could also declare a national emergency to secure money for the wall - a procedure which would allow him to bypass Congress and tap department of defence funding directly. But such a move would face fierce resistance from Democrats and some Republicans who are concerned about an overreach in presidential power. It would almost certainly face legal challenges in the courts.