US pulls troops out of northeast Syria as Turkey assault intensifies 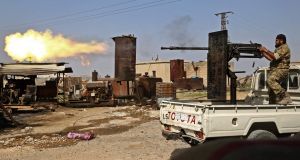 A Turkish-backed Syrian fighter fires during clashes in the border town of Ras al-Ain on Sunday. Photograph: Nazeer al-Khatib/AFP/Getty Images

Donald Trump has ordered all remaining US forces in northeast Syria to withdraw in the face of a growing Turkish military assault, risking an escalation of fighting as the region dissolves into chaos.

Mark Esper, the US defence secretary, said the roughly 1,000 American troops stationed in northern Syria would be pulled out because the Turkish offensive would be broader than expected.

The decision, which came after the Pentagon claimed that a US base had come under Turkish fire on Friday, followed reports of a mass breakout from a Syrian camp housing women and children believed to be linked to Islamic State. The escapes will exacerbate international fears that the offensive launched by Recep Tayyip Erdogan, the Turkish president, will foment a resurgence of the Sunni jihadi group as Kurdish fighters guarding them divert resources to fending off a Turkish assault.

It also followed accusations that Syrian militias fighting alongside the Turkish armed forces conducted a string of roadside executions at the weekend, including the killing of a female Kurdish politician, fuelling concerns about human rights abuses.

Under the onslaught by Turkey and its allied militant group, there were reports late on Sunday night that Kurdish forces had entered talks with the Syrian regime, which was said to have sent soldiers north. An official from Syrian Democratic Forces led by Kurdish fighters said no “official declaration” had yet been published, without denying that negotiations had begun. An analyst said a Syrian delegation had entered the long-contested town of Manbij to meet with Kurdish leaders.

Meanwhile, Syrian state media said Syrian army units were heading north to “face Turkish aggression”, without giving details about the size or direction of the force.

International anger at Ankara mounted at the weekend, as France and Germany halted arms sales to their Nato ally.

Mr Trump, who has long sought to end US involvement in Syria, faced a backlash when he announced last week that a small number of American troops in the vicinity of a looming Turkish incursion would be redeployed. The move prompted accusations that he had betrayed Kurdish forces who spearheaded the campaign against Islamic State by leaving them vulnerable to a Turkish assault.

Sunday’s withdrawal announcement will see him all but fulfil a campaign trail pledge to extricate the US from “endless wars” in the Middle East, but amplified bipartisan criticism of the US president in Washington.

Later, Mr Trump again threatened to impose “powerful sanctions” on Turkey after liaising with members of Congress. “There is great consensus on this,” he said. “ Turkey has asked that it not be done. Stay tuned!”

The stretch of northeast Syria that is the focus of the Turkish campaign has descended into disarray since Mr Trump, in effect, gave the green light for the assault. The death toll is mounting, large numbers of civilians are being displaced and concerns are rising about the Syrian extremist groups that Ankara has deployed as proxies in the fight.

Hundreds of people fled a camp housing almost 1,000 family members of Islamic State fighters on Sunday, according to rights monitors. Save the Children said foreign women and children allegedly connected to the Islamist group could now be “lost in the chaos”.

Meanwhile, six people were executed in roadside killings by Turkish-backed forces on Saturday, the Syrian Observatory for Human Rights, a London-based war monitor, reported, adding that 38 civilians had been killed since the operation started.

The alleged murders were the first signs of ethno-sectarian bloodletting springing from clashes between rogue elements of Ankara-aligned Arab militias and fighters from the Kurdish-dominated forces, who the West armed and trained to fight Islamic State jihadis but who Turkey views as terrorists.

Turkey has yet to respond to the claims. But Mustafa Yeneroglu, a rare voice of dissent within Mr Erdogan’s ruling party, criticised Ms Khalaf’s killing of as “horrendous”.

“The groups that carried out this atrocity are barbarians,” he said.

Asked about the allegations, Mr Esper said that Washington – which has threatened Turkey with sanctions over the offensive without specifying its red lines - was “hearing the same reports”. He said they would amount to “war crimes”, if true.

The incursion has seen almost the entire length of the border area between the two countries strafed with bombs and shelling since Wednesday. The ground offensive has focused on the towns of Ras al-Ayn, which Mr Erdogan said on Sunday that Turkey and its rebel allies had seized, and Tal Abyad, which he said was besieged.

About 130,000 people have fled, according to the United Nations. Meanwhile, Turkish towns have come under fire from inside Syria, killing 18 civilians.

European Union foreign ministers and leaders are expected to discuss a possible bloc-wide arms embargo during talks this week. But such a decision would require unanimity among the 28 member states, which have struggled to agree a common position given concerns about jeopardising Ankara’s co-operation on curbing migration and combating terrorism.