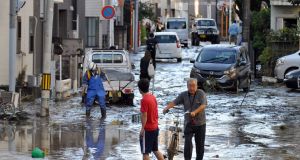 The vast majority of people in Tokyo watched the destruction wrought by the weekend’s typhoon in the same way as people around the world: on their televisions and on their phones. On Friday night, the city’s bright spots were extra busy because it was the start of a holiday weekend. The early signs of the typhoon were there in sporadic deluges of warm, intense rain which fell over the city centre. Everyone knew it was coming but normal life went on.

By Saturday morning, the air was warm and moist and the rain fell heavily. The street traffic was light and by noon many of the restaurant and cafe managers had placed signs notifying their closure in the early afternoon. By then, both locals and visitors had begun to raid the shelves of the local convenience stores and corner shops for water and pre-packaged meals and beers and chocolate and anything they felt they’d need to get them by for a long period indoors.

On the local television channels, the warnings had been stark. Tokyo’s governor, Yurkio Koike, was broadcast repeatedly warning of a typhoon of “an unprecedented scale” and requested that city dwellers take “caution to protect your own lives”.

Japan does not get over-excited by the notion of typhoons but in Tokyo the warning was taken seriously. By 2pm , the thoroughfares of Shibuya and Shinjuku that would normally be choc-a-bloc with human activity were deserted. The rain was falling harder. By 4pm, all of downtown Tokyo was bizarrely peopleless. And for all of the neon energy and inventiveness of the city, its uniqueness stems from the sheer number of people moving through its streets. By late afternoon, only eccentrics and thrill-seekers, unable to resist the temptation of having Tokyo to themselves, were moving through its streets. Without the people, the city seemed lost.

At about 4.45pm, a minor earthquake took place about 30 miles south of Katsuura, off the coast of Chiba. The measured 5.3, enough to send a tremor through the buildings in the centre of the city. That was about as rough as it got. The gusting winds that had been forecast didn’t rip through the city with anything like the destruction or force that had been feared. Instead, the heart of Tokyo settled down to a quiet night where the rain fell in sheets against the window panes and the newscasters brought confirmation of much worse news on the edges of the city, where the locals living near the river banks were hit with yet another horrible flooding experience in their homes and streets,

The sheer width of the typhoon had made predicting the worst of a storm a case of guesswork even for the meteorologists. As the night turned to morning, it emerged that the Nagano prefecture, overwhelmed by the swollen Chikuma river, suffered the worst. Almost 50 landslides had been recorded and more than 400,000 homes were without power.

But in central Tokyo, the typhoon passed through as a kind of threat that never fully materialised. The rain had begun to soften by midnight. Still, the streets remained ghostly quiet. The next morning, it was clear-skied and hot. Nothing was open but the restaurants and coffee shops, having posted notices that they may be closed through to Sunday, pulled the shutters and switched on the shutters. It was a holiday Sunday. The lucky ones were anxious to make the most of it. By lunchtime, the city was hopping again, even as the news channels played out reports of disaster elsewhere.