Dundalk woman Lisa Smith may have been in Ain Eissa camp 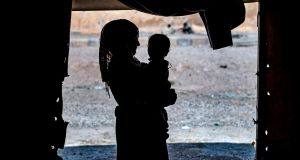 Women affiliated with Islamic State and their children fled en masse from a camp where they were being held in northern Syria on Sunday after shelling by Turkish forces in a five-day-old offensive, the region’s Kurdish-led administration said.

There was no immediate confirmation that she was in the camp or that she had fled. A spokeswoman for the Department of Foreign Affairs said in a statement on Sunday: "As in all cases where Irish citizens are in distress or danger overseas, the Department of Foreign Affairs and Trade will continue to engage with partners and provide consular advice and assistance. Given the particularly volatile and complex situation in the region, it would not be appropriate to comment on specific cases or any possible course of action."

Ms Smith moved to Syria, via Tunisia, in 2015 shortly after leaving the Air Corps, where she worked as a flight attendant on the Government jet and as a driver to senior officers. She also served for a time with the Army as part of the 27th Infantry Battalion.

The town of Ain Eissa, some 20 miles south of the Turkish border, is also home to one of the largest US-led coalition bases in north-eastern Syria.

Turkey’s cross-border attack in northern Syria against Kurdish forces widened to target the town of Suluk which was hit by Ankara’s Syrian rebel allies. There were conflicting accounts on the outcome of the fighting.

Turkey is facing threats of possible sanctions from the United States unless it calls off the incursion. Two of its Nato allies, Germany and France, have said they are halting weapons exports to Turkey. The Arab League has denounced the operation.

Ankara launched the assault against the Kurdish YPG militia after US President Donald Trump withdrew some US troops from the border region. Ankara says the YPG is a terrorist group aligned with Kurdish militants waging an insurgency in Turkey.

Turkey’s stated objective is to set up a “safe zone” inside Syria to resettle many of the 3.6 million Syrian war refugees it has been hosting. President Tayyip Erdogan has threatened to send them to Europe if the EU does not back his assault.

But the Turkish incursion has raised international alarm over large-scale displacements of civilians and, amidst the upheaval, the possibility of Islamic State militants escaping from prisons run by the Kurdish-led authorities.

The Kurdish-led forces have been the main regional ally of the United States against Islamic State in Syria.

The region’s Kurdish-led administration said in a statement that 785 IS-affiliated foreigners had fled the camp at Ain Issa. The Syrian Observatory for Human Rights, citing sources in the camp, said around 100 people had escaped.

In apparent reference to Turkish-backed rebels, the Kurdish-led administration said “mercenaries” attacked the camp where “Daesh elements” - a reference to Islamic State - in turn attacked camp guards and opened the gates.

The Kurdish-led Syrian Democratic Forces (SDF) hold swathes of territory that was once part of Islamic State’s “caliphate”. The SDF has been keeping thousands of members of Isis in jail and tens of thousands of their family members in camps.

SDF official Marvan Qamishlo said there were not have enough guards for the camp, which is north of Raqqa and about 30 km south of the Turkish border.

“The guarding is very weak now,” he said, adding there were now just 60-70 security personnel at the camp compared with a normal level of no less than 700 in the camp of 12,000 people.

Along the front lines, Turkish forces and Syrian rebels entered Suluk, some 10 km from Turkey’s border, the Observatory said on Sunday.

Turkey’s state-owned Anadolu news agency said the rebels seized complete control of Suluk. But the SDF’s Qamishlo said SDF forces had repelled the attack and were still in control.

Suluk is southeast of the Syrian border town of Tel Abyad, one of the two main targets in the incursion, which was bombarded by Turkish howitzers on Sunday afternoon, a witness in the neighbouring Turkish town of Akcakale said.

Machinegun fire resounded around the Syrian frontier town of Ras al Ain, 120 km (75 miles) to the east of Tel Abyad, while Turkish artillery continued to target the area, a Reuters reporter across the border in Turkey’s Ceylanpinar said.

Turkish-backed Syrian rebels, known as the National Army, advanced into Ras al Ain on Saturday but by Sunday there were still conflicting reports on which side was prevailing in the town.

The Syrian Observatory said the SDF, in which the YPG comprises the main fighting element, had recovered “almost full control” of Ras al Ain after a counter-attack.

A spokesman for the National Army denied this, saying its forces were still in the positions they took on Saturday.

More than 130,000 people have been displaced from rural areas around Tel Abyad and Ras al Ain as a result of the fighting, the United Nations said on Sunday. The UN Office for the Co-ordination of Humanitarian Affairs said OCHA and other relief agencies estimated up to 400,000 civilians in the Syrian conflict zone may require aid and protection in the coming period.

Mr Erdogan has dismissed the growing international condemnation of the military operation, saying Turkey “will not stop it, no matter what anyone says”. - Additional reporting Reuters/AP