US bid to extradite Julian Assange is ‘abuse of power’, UK court told 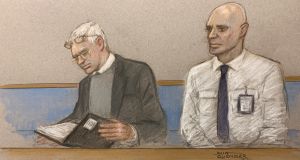 Julian Assange (left) in a courtroom sketch during his extradition hearing in London on Monday. Photograph: Julia Quenzler/Reuters

The US attempt to extradite Julian Assange on espionage charges, is an “abuse of power”, the WikiLeaks founder’s lawyer told a London court on Monday.

Edward Fitzgerald said there was a range of evidence showing that US officials were acting in bad faith towards his client, including that they contemplated having Mr Assange poisoned or kidnapped while he was hiding in Ecuador’s embassy in London between 2012 and 2019.

“The whole history that I have . . . set out provides the clearest evidence that this extradition request is an abuse of process by reason of bad faith and abuse of power,” Mr Fitzgerald said.

He was speaking at Woolwich Crown Court in southeast London, where Mr Assange is fighting extradition to the US on charges of espionage and computer hacking surrounding the 2010 publication by WikiLeaks of a huge cache of secret documents passed to him by Chelsea Manning, the former US military intelligence analyst.

The trove – which included 90,000 activity reports relating to the war in Afghanistan, 400,000 relating to the Iraq war, and 250,000 US diplomatic cables and other highly sensitive information – was one of the largest leaks ever of classified material and caused considerable embarrassment to the US government.

Washington wants Mr Assange to be brought to the US to face one charge of computer hacking and 17 charges of violating the US’s 1917 Espionage Act. His defence says he could face a sentence of 175 years if convicted, although James Lewis, for the US government, told the court that in fact people convicted of similar offences recently had received relatively short sentences.

Mr Fitzgerald reiterated claims made last week that Dana Rohrabacher, then a Republican US congressman, visited his client at the Ecuadorean embassy in August 2017 and offered him immunity from prosecution if he signed a statement confirming that Russia was not involved in a leak of documents stolen from the US Democratic party and published by WikiLeaks during the 2016 US presidential election.

The barrister also argued that the Trump’s administration’s decision to pursue Mr Assange’s extradition, reversing a 2013 decision by former president Barack Obama, was proof of “President [Donald] Trump’s effective declaration of war on leakers and journalists”.

Mr Assange’s lawyers argued that he was working as a journalist when he obtained and published the leaked material, and that he should be covered by freedom-of-speech protections under the European Convention on Human Rights.

In his remarks to district judge Vanessa Baraitser, James Lewis, acting for the US government, accused Mr Assange of putting at risk the lives of a number of people who had helped the US military in Afghanistan and Iraq by publishing the leaked documents without redacting their names.

Mr Lewis told the court that some sources had disappeared after their names appeared on WikiLeaks’ website, although he admitted that the authorities could not prove that their disappearance was a direct result of the disclosure.

The lawyer said Mr Assange was “no journalist”, adding: “This is made clear by the totality of his behaviour in the indictment. No responsible actor, journalist or otherwise, would purposely publish the names of confidential sources in war zones, exposing them to the gravest danger.”

He went on to say that the offences in the extradition request all related to obtaining the information or exposing confidential sources in Afghanistan and Iraq, knowing it would expose them to danger.

“The disclosure charges are solely where risk of harm was caused,” Mr Lewis said.

The hearing is not a trial of the facts of the case. The US side has only to show that the alleged offences were crimes in the US and in the UK at the time they were committed. Mr Lewis said the offences would be crimes in England and Wales under the Official Secrets Acts and UK legislation against misuse of computers.