Group of Americans on quarantine ship flown back to States 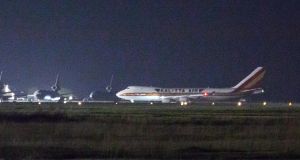 A plane carrying American passengers, who were recently released from the Diamond Princess cruise ship in Japan, arrives at Travis Air Force Base in California on Sunday. Photograph: Getty Images

A group of Americans have cut short a 14-day quarantine on the Diamond Princess cruise ship in the port of Yokohama, near Tokyo, to be flown back to the US.

But those who have flown home from Japan will have to spend another quarantine period at US military facilities to make sure they do not have the coronavirus.

Defence minister Taro Kono tweeted that Japanese troops helped transport 340 US passengers on 14 buses from Yokohama to Haneda airport. About 380 Americans were on the cruise ship.

Among those who decided to trade one quarantine for another were Cheryl and Paul Molesky.

Mrs Molesky sent The Associated Press a video of her and her husband boarding a plane with other Americans.

“Well, we’re exhausted, but we’re on the plane and that’s a good feeling. Pretty miserable wearing these masks though, and everybody had to go to the bathroom on the bus,” she said.

The US embassy in Tokyo said Washington evacuated the Americans because the passengers and crew members on board the Diamond Princess were at a high risk of exposure to the virus.

The US State Department announced later that 14 of the evacuees received confirmation they had the virus but were allowed to board the flight because they did not have symptoms. They were being isolated separately from other passengers on the flight.

The Americans were flown to Travis Air Force Base in California and Lackland Air Force Base in Texas. After arriving in the US, all of the passengers must go through another 14 days of quarantine — meaning they will have been under quarantine for a total of nearly four weeks.

“We are glad to be going home,” Mrs Molesky earlier told NHK TV in Japan. “It’s just a little bit disappointing that we’ll have to go through quarantine again, and we will probably not be as comfortable as the Diamond Princess, possibly.”

Mrs Molesky also said she was worried about the rising number of patients on the ship.

On Sunday, Japan announced another 70 infections on the Diamond Princess, raising the ship’s total number of cases to 355. Overall, Japan has 413 confirmed cases of the virus, including one death. – PA