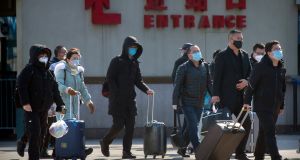 The first coronavirus death outside Asia has been confirmed in France. Photograph: Mark Schiefelbein/AP Photo

An elderly man infected with the coronavirus has died in hospital in France in what is believed to be the first death from the epidemic outside of Asia.

The Chinese tourist, aged 80, was visiting Paris when he was taken ill. He had been in hospital for three weeks. The man and his daughter, who is 50 and also tested positive for the virus, were being treated at Bichat hospital.

Nine other cases of the virus have been recorded in Europe including five Britons, one of them a nine-year-old boy, who were among a group staying in the village of Contamines-Montjoie, a ski resort in the French Alps.

Of the total of 11 cases confirmed in France, six remain in hospital - including the Chinese patient’s daughter - where their conditions remain stable. French health authorities say four have recovered.

Agnès Buzyn, the French health minister, said the Chinese man’s condition had worsened in recent days and that he had died on Friday evening.

The patient, from the Hubei province at the heart of the Chinese epidemic, had a lung infection caused by the Covid-19 virus. He had arrived in France on 16 January and was taken to hospital nine days later and put into strict isolation.

“His condition declined rapidly and he had been in a critical state for several days,” Buzyn said. “It’s the first death from the coronavirus outside Asia and the first in Europe.”

She said the man’s daughter should be able to leave hospital soon.

On Saturday, China reported that confirmed cases of the virus had risen to almost 66,500 - more than 1,500 people have died. There have been more than 580 confirmed cases outside mainland China, and three deaths - in the Philippines, Hong Kong and Japan.

Europe has reported 46 cases of the virus that first emerged in central China in December. Patients in nine European countries have tested positive for the Covid-19 virus, 16 of them in Germany.

Health officials in the UK have contacted more than 200 people who attended a conference in central London after it emerged one delegate is suffering from coronavirus.

Public Health England (PHE) sent a letter to those who were at the UK Bus Summit at the QEII Centre in Westminster on February 6th, including several MPs, two of whom have now decided to stay mostly at home.

The person taken ill is one of the nine people diagnosed with coronavirus in the UK.

Meanwhile, a Channel 4 employee is among those being tested for coronavirus after feeling unwell following a trip to Asia.

A Channel 4 spokesman said: “On Thursday, a member of staff at Channel 4 who had travelled to Asia within the last month felt unwell.

“As a precautionary measure, they decided to seek medical advice and, in line with the latest public health advice regarding the coronavirus, they were taken to hospital for a precautionary test.

“We have informed our staff of this and continue to follow all the latest public health guidance.”

NHS chief executive Sir Simon Stevens said on Thursday that many more people in the UK may need to self-isolate to contain the illness.

Beijing has told those returning to quarantine themselves for 14 days, while the transport ministry said travel volumes were about a fifth of what they usually are after the holiday, which was extended for 10 days to help stall the virus.

The official Beijing Daily said people failing to quarantine themselves on return from the holidays would be punished.

“All those who have returned to Beijing should stay at home or submit to group observation for 14 days,” Beijing’s virus prevention working group said in a notice the newspaper cited.

“Those who refuse to accept home or centralised observation and other prevention and control measures will be held accountable under the law.”

Africa has recorded its first case of the coronavirus, in Egypt.

The biggest cluster outside China has been on the Diamond Princess, a cruise ship owned by Carnival Corp, that has been quarantined since its arrival in Yokohama, Japan, on February 3rd. Of its 3,500 passengers and crew, 285 have tested positive for the infection. - Agencies