Unflappable confidence of UK’s health establishment about to be tested 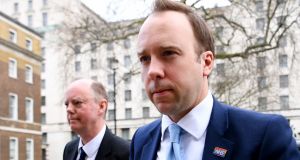 The news that Boris Johnson and health secretary Matt Hancock have tested positive for coronavirus will have no immediate impact on Britain’s response to the pandemic. Both men are well enough to continue working remotely, as is chief medical officer Chris Whitty, who is also in self-isolation after experiencing symptoms of the virus.

But the pace at which the virus has moved through Downing Street, which has seen other figures succumb in recent days, has highlighted Britain’s enduring divergence from the international norm when it comes to testing and contact tracing.

The World Health Organisation (WHO) has stressed the importance of testing and tracing in combating the virus and both measures have been important elements in successful strategies pursued by countries like South Korea.  Mike Ryan, executive director of WHO health emergencies programme, repeated the message about the importance of surveillance at a press conference on Friday.

“Countries simply have to have in place a system to detect, isolate, contact trace and quarantine contacts,” he said.

Britain conducted testing and contact tracing at the start of the epidemic but moved away from both once the number of cases began to rise. Deputy chief medical officer Jenny Harries said this week that “there comes a point in a pandemic where that is not an appropriate intervention” and that Britain had always planned to focus on testing those who were admitted to hospital.

She also suggested that the WHO’s advice to “test, test, test” was intended for countries less developed than Britain.

“So the point there is that they are addressing every country, including low-and middle-income countries, so encouraging all countries to test of some type.”

Among those who are testing extensively are countries like Germany, which has a superior health system to Britain’s and has so far experienced far fewer deaths from the coronavirus. The unflappable confidence of Britain’s health establishment in its sometimes confusing approach to the pandemic will be tested in the coming weeks, when the pandemic moves towards its peak.