Making hand sanitiser and feeding health workers: Businesses branch out to do their bit

Companies around the country have announced initiatives amid coronavirus crisis 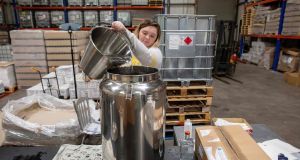 Staff prepare to bottle hand sanitiser at Listoke Distillery and Gin School in Tenure Business Park in Co Louth. The gin stills of the Listoke Distillery have been repurposed in the fight against the coronavirus. Photograph: Paul Faith/AFP

“Be kind” has become a mantra for many as countries all over the world – including Ireland – try to come to terms with the greatest global public health crisis in a century.

Economies everywhere are in freefall, people are losing their jobs by the thousands and everyone – or at least those who are behaving responsibly – are limiting their contact with other human beings and staying in their homes. People are afraid as the world fights an invisible enemy.

But there are good news stories too. Businesses big and small and individuals have been taking steps to make things just a little better for their customers and for wider society in these dark days.

Cafes and restaurants are feeding their neighbours and the critical frontline healthcare workers who are putting in long shifts in hospitals across the country, distilleries have turned their attention to making hand sanitiser, gyms and yoga studios are offering free online classes and multinational companies have played their part, often without looking for any attention.

Here are just some of the businesses who are doing the right thing today. There are many hundreds more.

Micil Distillery in Galway has paused its poitín making and is making hand-sanitiser for Salthill and Galway community groups that have pre-purchased quantities at cost to distribute to the elderly and less well off, who may not be able to afford such a “luxury”.

Clonakilty Distillery have also switched to producing hand sanitisers as have several other distilleries around the country.

Nespresso, the global coffee company, have been sending machines and supplies of coffee to hospitals and testing centres around Ireland and have sought no publicity for the move.

Vodafone Ireland has rolled out measures to help some of the most vulnerable and isolated people in Ireland during thecoronavirus crisis. It has donated 1,000 new smartphones along with 2,000 x €20 credit top-ups to Alone, the organisation which supports older people.

Crucially, the smartphones have all been pre-loaded with useful apps including WhatsApp, Facebook, Spotify, RTÉ News along with information about online food deliveries and other important phone numbers.

The company has also made an emergency donation to Women’s Aid so that the charity can provide immediate assistance and services to women identified as being under increased threat from abuse and violence during this time.

Earlier this week, Ryanair offered its entire fleet of 450 aircraft to EU governments for rescue flights and to transport vital medicines, personal protective equipment and emergency food supplies across the world.

Feed the Heroes is a fund set up in response to the Covid-19 emergency to thank and support Ireland’s healthcare workers. The fund is being used to help provide the 200,000 healthcare workers fronting the effort to combat Ireland’s biggest ever public health crisis with a warm nutritious meal as a token of gratitude. Feed the Heroes is working with restaurants and catering companies to prepare the meals and co-ordinating with the healthcare teams to ensure they get to where they are needed.

Established by Cian O’Flaherty with a view to raising €1,000 to fund a few meals an overwhelming response has seen more than €470,000 raised from almost 10,000 donations over the last 12 days.

Lidl and FoodCloud have also launched an emergency food appeal in stores across the country to support people in need. Lidl is appealing to customers who would like to purchase an extra tinned or long shelf-life product to leave it in a dedicated trolley in shops this weekend. The donations will then be distributed through FoodCloud to local charities and food banks.

Specsavers staff have been carrying out remote hearing aid repairs and delivering prescription frames to people’s home while their stores have been open for emergency scenarios and have looked after healthcare workers, food delivery drivers and other essential service providers.

Peter Mark has been offering people tutorials on how to keep their hair sleek and shiny as all the salons are closed.

McKenna and Co Solicitors in Dublin is organising wills for free during the crisis. “While we can’t offer healthcare, we can offer legal advice and services, and that is why we are offering free wills. We know that making a will can be frightening and intimidating, but we want to make it accessible and empower people to take back control of what they can during these uncertain times.” All wills made during this week will be free of charge, with no hidden consultation fees or outlay.

The Laughter Lounge will be regularly live-streaming comedy sets on its website at a cost of €5 per user with all the money going to the Irish Cancer Society, in an attempt to make up some of the shortfall as a result of the charity’s recently cancelled Daffodil Day. They are calling it Laugh-o-dil Day.

East Road Café in East Wall have been dropping off meals and sandwiches to hospitals around Dublin for frontline workers. Mr Waffle in Galway has been delivering 150 lunches a day to University Hospital Galway for frontline staff despite having to close its doors to the general public. Staff and former staff have been giving their time free to ensure the people who need it the most have access to good wholesome food in the days ahead.

Burkes the Butchers in Drimnagh is offering a free delivery service of its own products and its staff will pick up essential items from chemists and food shops nearby to the people who need it.

The Village Bookstore in Greystones is one of many bookshops which has been offering free delivery while Maggie & Me in Howth has pivoted its business away from clothes to jigsaws for both adults and kids. The shop has been hand delivering them – while keeping socially distant – to local people.

City Print in Cork has teamed up with artist and illustrator Jason O’Gorman and produced 7,000 copies of a colouring book which they have been giving away free at garages around the city.

St Patrick’s Grammar School in Armagh has been donating all the technology protective goggles it has to the NHS.

The Ballyseedy Garden Centre in Tralee has offered its kitchen for Meals on Wheels. The Wedding Scribblers in Cork are giving out free wedding stationery to frontline workers who are getting married.

Insanity Fit Zone in Palmerstown has set up a Facebook support group for everyone, not just members, with live workouts twice a day for the whole family. They are also running live cooking classes week. Body Transformations Studio in Clongriffin, Dublin 13, have been offering live workouts every day at 11.30am with people invited to use “stuff you would have around the house as substitutes for equipment”.

Fitness instructor Sinéad Kennedy is offering free stretch and relax classes for older people on sineadkennedy.com. Last Monday, she had more than 400 people stretching with her and the Rainforest Spa in Co Wicklow is allowing yoga teachers to film in their empty studio for free.

High Nelly Bikes in Co Limerick is fixing and maintaining the bikes of any healthcare worker in area at no cost.

Chrysanthemum Chinese restaurant in Rathfarnham will give free meals to the over-65s in the neighbourhood as it has been doing for the last few weeks. The Choice Hotel Group is asking all frontline HSE workers to register on choicehotelgroup.ie so they can book a free stay across its group of hotels.

We appreciate there are many more companies doing their bit to make the lives of their customers and a bit better, to provide essential aid to those who need it the most and to lift flagging spirits. If you hear of such a business – or indeed if yours is such a business – and would like to let us know what you are doing, please get in touch cpope@irishtimes.com.