An ER doctor in Queens, New York Dr Colleen Smith gives a rare look inside a hospital at the centre of the coronavirus pandemic. “We don’t have the tools that we need", she says. Video: New York Times 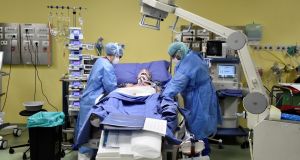 Members of the medical staff in protective suits treat a patient suffering from coronavirus in an intensive care unit at the San Raffaele hospital in Milan, Italy. Photograph: Flavio Lo Scalzo/Reuters

Italy recorded the highest daily death toll from coronavirus yet seen on Friday and authorities warned the country has yet to reach the peak of its outbreak, as infections worldwide topped half a million.

The virus killed 919 people in 24 hours in Italy, meaning more than 9,100 people have died from the disease there, as the number of people diagnosed with the disease exceded 86,000 even with the country under strict lockdown.

“We haven’t reached the peak and we haven’t passed it,” the chief of the Superior Health Institute, Silvio Brusaferro, told press ahead of the release of the grim toll.

Italian epidemiologists warned that the country’s infection numbers are likely to be much higher than reported – perhaps by five times – although two weeks into a nationwide lockdown the daily increase seems to be slowing, at least in northern Italy.

Friday’s cumulative death tally included 50 fatalities that actually occurred on Thursday in the northern Piedmont region, but whose notification arrived too late to be included in the official figures for March 26th, the agency said.

This has led to some confusion and means that some media outlets are reporting the Friday daily tally at 969, rather than 919.

Spain saw its death toll rise by a fifth in one day to reach close to 5,000, as patients streamed into hospitals to seek treatment from medical staff without enough equipment to protect themselves.

Real Madrid’s Bernabeu soccer stadium has been converted into a medical supply store, a fairground in Madrid has been turned into a mass testing area and a skating rink is now a morgue.

Spain’s severely strained health service has 9,444 workers infected with the virus, also known as Covid-19, a figure Amnesty International said is the highest among countries affected by the outbreak. The number is nearly 15 per cent of Spain’s total cases.

The day-on-day increase of infections is slightly lower for the first time since a rapid rise in early March. There was a 8,500 increase reported on Thursday. Spain has the second-highest tally in Europe and fourth in the world.

“It’s true that we have more deaths than what we saw yesterday, but it’s also true that the percentage increase today is similar to that of he past three days and it appears there is a stabilisation,” said Fernando Simon, the head of the health emergency co-ordination centre.

The worldwide death toll climbed to more than 25,000, according to Johns Hopkins University, but more than 124,000 people have recovered, about half in China.

The World Health Organisation warned of chronic global shortages of protective equipment, as its top emergencies expert Dr Mike Ryan said the world was “moving to an uncertain future”.

“You see many countries around the world are just beginning the cycle of this epidemic,” Dr Ryan said. “Some have been through the cycle of the epidemic like Singapore and China and are now desperately trying not to have the disease re-emerge and cause another wave of infections because of disease importations.”

The WHO also warned that the United States risks becoming the epicentre of the pandemic, which could kill 81,000 people in the next four months, according to analysis by the University of Washington School of Medicine.

President Donald Trump hit out at carmakers in a series of tweets, calling on them to switch their production to medical supplies, demanding that they “START MAKING VENTILATORS, NOW!!!!!!”

A surge in infections took the US total over 92,000 – the highest in the world – amid warnings that the pandemic is accelerating in cities such as New York, Chicago and Detroit.

The US House of Representatives has rushed president Donald Trump’s $2.2 trillion (€1.98tn) rescue package to help a US economy and health care system left flailing by the coronavirus pandemic. It will ship payments of up to $1,200 dollars to millions of Americans, bolster unemployment benefits, offer loans, grants and tax breaks to businesses large and small and send billions more to states, local governments and the nation’s all but overwhelmed healthcare system. “Today we’ve all acknowledged our nation faces an economic and health emergency of historic proportions,” said House speaker Nancy Pelosi.

New York governor Andrew Cuomo said 44,635 people have tested positive in the state, up about 7,400 from Thursday, and that 519 New Yorkers had died from the virus, up from the previous day’s total of 385 deaths.

“We are battling a deadly virus,” Mr Cuomo said. “It’s the worst news but it’s not unexpected news either.”

Mr Cuomo said the state was seeking to build another four temporary makeshift hospitals to add an additional 4,000 beds, which he called part of a plan B to try to make up for a shortage of medical resources.

In France, a 16-year-old student became the youngest person in the country to die from the virus. Her sister said she was admitted to hospital on Monday after developing a “slight cough” last week, and she died on Tuesday in hospital in Paris.

“We must stop believing that this only affects the elderly,” said the sister. “No one is invincible against this mutant virus.”

France has reported more than 1,600 deaths and 29,000 infections, and on Friday extended its nationwide confinement measures for another two weeks until April 15th.

The British government has been forced to consider emergency back-up plans if its leadership is incapacitated, after prime minister Boris Johnson and health secretary Matt Hancock tested positive for the virus. Chief medical officer Chris Whitty is also in isolation after experiencing symptoms.

China announced plans to close its borders to foreign citizens from Saturday, reported five deaths and 55 cases on Thursday, and said that all but two of the new cases were from outside the country.

Cases in South and Central America surpassed 10,000 as of Thursday, with major outbreaks in Brazil, Chile and Ecuador, which are each reporting over a thousand cases.