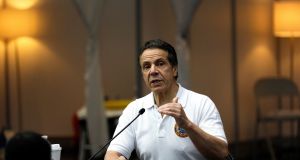 Andrew Cuomo: The New York governor emphasised the need for ventilators. “We’re gathering them in the stockpile so that when we need them they will be there,” he said. Photograph: Peter Foley/EPA

The death toll from coronavirus continued to rise in the United States on Friday, as the House of Representatives passed a $2 trillion stimulus package to help shore up the faltering economy.

President Donald Trump signed the Bill – the largest in American history – on Friday night, paving the way for a series of financial loans and payments to be made available to American citizens and businesses.

The United States has surpassed China in terms of the number of reported cases of Covid-19, prompting warnings from the World Health Organisation that it is likely to become the world’s next hot spot.

More than 85,000 people have tested positive for the virus across the country, while there have been more than 1,200 deaths.

New York continues to be the epicentre of the outbreak, with numbers continuing to rise across city and state.

In his daily briefing on Friday, New York governor Andrew Cuomo announced that 134 people had died in the state over the previous 24 hours, bringing the total death toll to 519. More than 44,000 people across the state have tested positive for the virus, with most based in New York City, which has reported 25,000 cases.

He also defended his call for more ventilators, after Mr Trump questioned whether the 30,000 ventilators sought by New York were really needed.

In an interview with Fox News host Sean Hannity on Thursday night, Mr Trump said he didn’t believe that hospitals needed up to 40,000 ventilators.

But Mr Cuomo emphasised the need for ventilators given that coronavirus is a respiratory illness.

“We’re gathering them in the stockpile so that when we need them they will be there,” he said. “We don’t need them today because we’re not at capacity today.”

While Mr Trump has resisted implementing the Defense Production Act, which would allow him to order US businesses to produce equipment needed to combat the Covid-19 outbreak, on Friday he invoked the act to compel General Motors to start producing ventilators, accusing the company of “wasting time”.

“Today’s action will help ensure the quick production of ventilators that will save American lives,” he said as he signed the presidential proclamation.

Earlier he hit out at the company’s chief executive, Mary Barra.

“Always a mess with Mary B,” he tweeted. “General Motors MUST immediately open their stupidly abandoned Lordstown plant in Ohio, or some other plant, and START MAKING VENTILATORS, NOW!!!!!! FORD, GET GOING ON VENTILATORS, FAST!!!!!!”

There were growing concerns about a spike in coronavirus cases in New Orleans, Los Angeles and Michigan.

The US navy’s medical ship USNS Mercy arrived at Los Angeles port on Friday, with 1,128 active duty medical personnel on board who will treat patients not affected by Covid-19.

The legislation, which was passed by a reduced number of House members by voice vote, comprises payments of $1,200 to American workers earning under $75,000, as well as payments of $500 per child. Those payments are phased out for those earning between $75,000 and $150,000.

An expansion of unemployment benefits, loans for businesses and specific aid for the airline industry are also included in the plan.