European doctors warn of Covid-19 ‘disaster’ for refugees on Lesbos 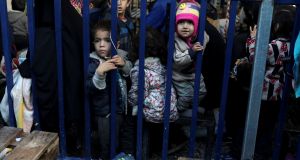 Doctors from across Europe have launched an appeal for the European Union to “bring refugees to safety immediately”, warning that an outbreak of coronavirus in a Greek refugee camp would have “catastrophic consequences”.

If the virus spreads among this vulnerable cohort who do not have access to proper healthcare facilities at Moria camp on the island of Lesbos, the situation could “escalate to a medical disaster”, the #SOS Moria campaign has warned.

“It is an illusion to think that a Covid-19 outbreak in these camps could be kept under control,” said a statement on the campaign’s website. “40,000 people are living on a few square kilometres. There are only a handful of doctors present. Many children and adults are already ravaged by physical and mental traumas.”

The campaign underlines that doctors take a “sworn oath” to provide medical care to all people irrespective of their background. “As European doctors, we are obliged to do everything possible to prevent this medical catastrophe.”

The petition, which has been signed by 5,024 doctors so far, calls on EU leaders to comply with a 2016 agreement which stated that all member states take a fixed number of refugees from Greece and Italy.

Irish GP Dr Nicola Cochrane, who returned from Greece last week after volunteering in the Moria refugee camp, said there was no way of self-isolating in the camp if a person contracted the virus.

About 19,400 people currently live in the Moria camp which was built to accommodate just 3,000. Earlier this month, a young child died in a fire in the overcrowded camp after a blaze burned through two containers used as living quarters.

Each of the camp’s taps is shared by about 1,300 people, making it impossible to follow EU guidelines on hand-washing during the Covid-19 pandemic, says Dr Cochrane.

“There’s no space between tents, they’re right beside each other. You have dense overcrowding so there’s no feasible way anyone could self-isolate or cocoon.”

Shortly before Dr Cochrane left Moria, the Greek authorities introduced an overnight curfew and now she understands the place is completely locked up. If the virus spreads into the camp, hundreds of people could die, she says.

“The vulnerable people will become infected very quickly because they have no resilience whatsoever. People in the camp are very afraid. The frail and vulnerable who already have chronic medical conditions – I would expect they will die.”

While in Moria, Dr Cochrane helped compile a list of the most vulnerable people in the camp who need to be moved out as quickly as possible. They narrowed the list down to 158 names – the oldest and the sickest. However, the Greek authorities refused to relocate this cohort, Dr Cochrane told The Irish Times.

The nearby hospital in the town of Mytilini is barely equipped to support the local population and will buckle if hundreds of refugees become ill, she said.

“The approach from the EU has been to protect the elderly, the sick and vulnerable and keep them at home so they’re not exposed. The people in Moria do not have that luxury.”