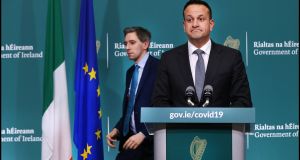 The black humour, by all accounts, is of a pretty high standard. Those in and around government, who have participated in recent weeks in events and decisions previously never imagined, report that the jokes are constant and the levity ever-present. Of course, undertakers are the same.

Shane Ross complains he has seen two parts of his ministerial brief – transport, tourism and sport – completely shut down: could they please leave him with the rest of it? Having practically abolished private medicine, Simon Harris wonders why is not a hero for People Before Profit. Other more politically-barbed jokes are related on condition they are not printed. His colleagues rib Leo Varadkar that he is now the leader of a more left-wing government than Jeremy Corbyn could have ever dreamed of.

Well beyond the corridors of Government Buildings, there is a sense of foreboding about the weeks ahead

Paul Reid, the HSE chief, tells people they are implementing “Sláintecare on speed” – the health reform plan that was supposed to take 10 years. Habitually parsimonious officials in the Departments of Finance and Public Expenditure, whose response to every spending request is usually a firm “no”, say they are enjoying their newfound popularity, obtained by saying “yes” to everyone.

But they know it will become harder to see the lighter side of things. And soon it may be impossible. Hospitals are frantically preparing for an influx of patients ill with coronavirus; doctors pray they will not have to make the same sort of life and death decisions their Italian colleagues have faced. Temporary mortuaries are being constructed. Churches are shut, so the dead will be taken directly to the graveyards. Well beyond the corridors of Government Buildings, there is a sense of foreboding about the weeks ahead. “We must brace ourselves for much worse to come,” Simon Coveney told the Seanad yesterday. The sense of the gathering storm is everywhere.

As Hemingway wrote about going bankrupt, the crisis has progressed in two ways: gradually, then suddenly. The march of the disease across the world from China seemed to be happening in slow motion; then, very quickly, Europe was the epicentre. The grim inevitability about the virus’s arrival in Ireland was somehow unreal, yet simultaneously terrifying. On Monday, at his daily briefing for journalists, the chief medical officer Tony Holohan presented a graph of the likely spread of the virus, its spike heading to vertiginous heights on the screen. Where are we on that graph now, he was asked. Holohan pointed to the very bottom of the spike: “Here.”

In truth, the health service has been preparing frantically for weeks now – its chiefs conscious that they are in a race against time, against the spike on Holohan’s graph, to prepare hospitals for the anticipated wave of infections. In effect, the health service has been expanding every day. New staff, new hospitals, new beds, new capacities. Will it be enough? People grimace. We hope so, they say.

The medical response is led by the National Public Health Emergency Team – NPHET or “en-fet” – a group of public health experts led by Holohan, who briefs the political leaders on the team’s recommendations. All the major Government public health measures – closing the schools a fortnight ago, and most businesses this week – have been done on NPHET advice.

There are two “huddles” every day in the Department of Health, where senior officials discuss the day’s progress, problems and latest projections with Harris. The young Minister for Health realised early what Ireland was facing and has fronted the Government’s response with energy and authority, mastering the science, working 18-hour days, in constant contact with the Taoiseach’s office. But the strains of the crisis are written in his face and his greying hair.

Ireland’s small size and centralised system of government helps it manage crises pretty well. At the epicentre, just a few people are calling the shots

Politically, there isn’t a war cabinet as such, insiders say. Instead, there’s a rolling series of conversations through various formats among a relatively small number of people. The Taoiseach, of course, the Minister for Health, and finance, the Tánaiste, their senior officials. The chief medical officer. The head of the HSE, Paul Reid, and his senior staff. A senior officials group is headed by assistant secretary Elizabeth Canavan. John Concannon, exiled after the controversy of the strategic communication unit, is back to help with the “comms”.

At the centre is Martin Fraser, head of the Department of the Taoiseach and the country’s most senior mandarin. Fraser’s writ runs throughout the public service and the state apparatus. Personally unassuming and approachable, he is also focused, ruthless and possessed of an encyclopaedic knowledge of the how the great machine of government works in practice. Though its bureaucracy is slow to change, Ireland’s small size and centralised system of government helps it manage crises pretty well. At the epicentre, just a few people are calling the shots.

The Dáil debate on the (first) emergency legislation was still ongoing – last Thursday week – when Minister for Finance Paschal Donohoe was coming around to the realisation that the €3 billion provision he had announced a week earlier would not be sufficient to the task at hand; not remotely sufficient. This won’t be enough, his senior officials told him, we’ll have to do a wage subsidy. Donohoe has prided himself on producing a budget surplus in the year of a general election – a demonstration of fiscal and political responsibility that has not, to put it mildly, been common among finance ministers in Ireland. Now his surplus was disappearing before his eyes, transforming itself into a vast deficit of many billions of euros, piled on to the national debt he had carefully and painfully shrunk. Get me a plan, he said.

Senior officials, principally the three secretary generals of the departments in the frontline – Robert Watt in public expenditure, Derek Moran in finance and John McKeon in social protection – got their teams working on options, practicalities, costs and deliverability. The Revenue Commissioners were also called in. Even still, there were many aspects of the scheme that weren’t entirely clear. “We’ll just have to figure that out,” was the response to several questions about how the scheme was going to work.

By Sunday night, a meeting in the Department of the Taoiseach was able to give the draft scheme the go-ahead; it was to be announced on Tuesday. Late last week, senior officials were estimating the total cost of the crisis could be as much as €10 billion; a week later, that had doubled. If the first instinct of politicians is to throw money at problems, this is of a different order entirely. There has never been anything remotely like it.

While officials worked feverishly over the weekend, much of the population was out enjoying the sunny weather – leading to widely amplified complaints that social distancing requirements were not being sufficiently observed. In fact, the public response has been pretty good – much of the country had effectively shut down even before this week’s restrictions. That in turn piled pressure on the Department of Social Protection, which now has nearly 300,000 new clients and counting. The decision was taken to pay everyone, and check them afterwards. By contrast, in the UK, people will be waiting up to five weeks for payment.

As officials were finalising the preparations for the announcement of the scheme on Monday, news came from Downing Street that British prime minister Boris Johnson(who would reveal on Friday that he had contracted the virus) was about to announce a widespread shutdown across the UK. Meanwhile, the NPHET team was concerned about the increasing rate of community transmission here and was preparing to issue recommendations for further restrictions on commerce and social life. Tuesday’s announcements would not just be about the massive financial package – but also about the extension of the shutdown.

They watch the rate the virus is spreading, and they watch the expanding capacity of the health service, and wonder at what point the first might outpace the second

Meanwhile, other officials were working to complete another round of emergency legislation – enabling the wage supports, but also freezing rents and banning evictions – which had to be completed by the end of this week. Due to the expiration of the current Seanad, no new legislation will be possible until a new government is formed, and a new Taoiseach completes the new Seanad with his 11 nominees, Fraser told party leaders. So now a new government will now have to be put together in the coming weeks. On Wednesday, Fine Gael and Fianna Fáil edged closer to that goal, declaring they would try to agree a programme for government. Like practically everything else, it is being done in circumstances of unparalleled pressure, urgency and trepidation about what the immediate future holds.

And none of them – officials, ministers, doctors – really know what that is. They watch the rate the virus is spreading, and they watch the expanding capacity of the health service, and wonder at what point the first might outpace the second.

While Harris and his officials have won plaudits for their openness in many respects, they have been less enthusiastic about sharing some information. They are wary of discussion about exactly where the point is that the health service will be overwhelmed. And what might happen then. “It’s the ICUs,” says one official simply. “That’s the critical thing. If you can’t get a bed with a ventilator, you can’t breathe, and you extinguish.”

1 Donald Trump is in trouble, and that could spell very bad news
2 Larger retail stores to reopen on Monday ahead of schedule
3 O’Doherty and Waters ordered to pay legal costs of case against State over Covid-19 laws
4 House parties are being held ‘with abandon’, Holohan warns
5 Taoiseach says €350 pandemic payment to be cut for some part-time workers
Real news has value SUBSCRIBE