Russia braces for national shutdown to slow spread of Covid-19 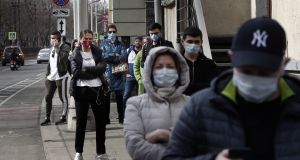 Russia will ramp up its fight against coronavirus on Saturday with the start of a nine-day halt to non-essential work when most people will be expected to stay at home, amid questions about the true scale of the outbreak in the world’s biggest country.

Officials confirmed 196 new Covid-19 cases on Friday, the largest one-day figure so far, taking the total number of people infected in Russia to 1,036, four of whom have died.

As British prime minister Boris Johnson revealed on Friday that he had tested positive for Covid-19, the Kremlin said one of its staff had also contracted the virus, but had not come into contact with Russian president Vladimir Putin.

Mr Putin (67) has told Russians not to go into work next week, except for people providing vital services and staffing key businesses such as food shops, pharmacies and banks. Others were told to work from home if possible.

Moscow mayor Sergei Sobyanin followed up that announcement with a decision to close all restaurants, cafes, bars and non-essential shops in the capital from Saturday until April 5th, in what he insisted was “not a holiday, but a serious measure to halt Covid-19”.

Russian prime minister Mikhail Mishustin said on Friday that those restrictions would apply nationwide, and he ordered officials to assess urgently whether every region from the Baltic to the Pacific had enough beds and supplies to handle the outbreak. Flights in and out of the country are being halted and thousands of state-run hotels, campsites and other recreational areas shut down.

“I ask for your understanding about the measures we are taking, and to spend next week away from public spaces. The most important thing for each of us now is to be at home,” Mr Mishustin told his compatriots.

“We understand that these restrictions are inconvenient, unpleasant and force us to change our habits, and many will see them as a kind of test, and indeed a pretty serious one,” he added.

“Let’s get through this with dignity. We won’t manage without preventative measures and we’re not doing it because we want to restrict people, but out of a need to reduce all movement and cancel trips that aren’t absolutely necessary.”

Mr Mishustin echoed Mr Putin in saying the country generally had the Covid-19 outbreak “under control”, but there has been a marked change this week in how Russian officials are tackling and talking about the pandemic.

On Tuesday, Mr Sobyanin told Mr Putin that “a serious situation is unfolding” and “the real number of those who are sick is significantly higher” than official data suggest.

“The fact is that testing volume is very low, and no one on earth knows the real picture . . . All regions, without exception – regardless of whether they have coronavirus patients or no patients – everyone needs to prepare,” he warned.

The following day Mr Putin, Russia’s leader for two decades, reluctantly postponed an April 22nd national vote on constitutional changes that could allow him to rule until 2036, and he announced next week’s sweeping work restrictions.

While state media repeat the Kremlin line on developments, on social media and in independent news outlets some experts question Russia’s official Covid-19 figures and medics complain of a severe lack of beds and equipment.

Russia’s state statistics agency reported that Moscow registered 37 per cent more pneumonia cases in January than a year earlier, leading some doctors to suspect that Covid-19 cases were hidden in those figures.

Survey results released on Thursday showed that 35 per cent of Russians do not fully trust the official Covid-19 statistics and a further 24 per cent do not believe them at all. The poll, by the Moscow-based Levada Centre, was conducted among 1,624 people in 50 Russian regions.