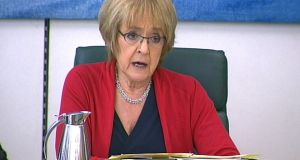 The British Labour Party averted a bitter showdown with MPs over its code of conduct on Monday, with a key vote on whether it should adopt an international anti-Semitism definition deferred until parliament returns in September.

Jeremy Corbyn was criticised by some MPs for not attending the crunch meeting of backbenchers of Monday, though the leader’s office said he had never been scheduled to attend.

Ms Hodge has since defended her comments and instructed lawyers to fight disciplinary action by the party.

Speaking after the meeting, Ms Hodge said she felt extremely emotional because of the show of support from MPs and said Mr Prescott’s comments were wrong. “He said it was not true the community has lost trust, but it is true,” she said. “The first step to rebuild trust is to accept the definition. We cannot start unless we accept it.”

The veteran Labour MP said she thought Mr Corbyn should have attended the meeting. “Clearly this is an issue that is totally central to my family and my politics. I think it would have been much, much better if he had been there,” she said.

In a letter on behalf of Ms Hodge sent to the Labour general secretary, Jennie Formby, on Monday, law firm Mischon de Reya accused the party of failing to set out the allegation against the MP or the rule that had been breached, calling it “hasty and ill-thought out disciplinary action ... the result of which appears to be predetermined”.

While the final vote has been delayed, the preliminary motion passed at Monday’s meeting means MPs are ultimately all but certain to vote to adopt the IHRA definition of anti-Semitism, with all its working examples, into their own official rulebook.

That move would put them directly at odds with the party’s ruling body and Labour leadership, which has endorsed a code of conduct where several examples have been excluded.

Labour hopes to reach a compromise in the coming weeks while it consults further on its code of conduct but MPs are highly unlikely to back down before the ballot in September.

The motion, proposed by two prominent Jewish Labour MPs, Louise Ellman and Ruth Smeeth, was passed without objection but will now go to a ballot on September 5th. MPs said they had agreed to the delay to allow fuller participation and to comply with parliametary party rules.

At the meeting, several Labour MPs urged the party to draw a line under the issue. Hilary Benn said it should “stop digging” and that the dispute had gone on too long, while fellow MP Kate Green said she was unable to look Jewish relatives in the eye while the saga dragged on.

Speaking after the meeting, Ms Ellman said it was “very moving to see the strength of feeling from colleagues in the room”.

If MPs vote to change their own rulebook, that change would then need to be put to the ruling national executive committee – which would vote on the change. Some MPs believe that would force committee members, including Mr Corbyn, to show their personal views on a subject that has caused widespread tension in the party and with Jewish communal leaders.

Labour has said the IHRA examples omitted from the new Labour code agreed by the national executive committee are already covered in the rest of the wider code. They include claiming that the existence of the state of Israel is a racist endeavour and comparing Israeli actions with those of the Nazis.

The committee voted to adopt the code last week, without some of the specific IHRA examples, but said discussions and consultation would continue with the Jewish community.

However, Ms Ellman said it was inaccurate to suggest the party was still consulting. “It’s completely false, they know exactly what the Jewish community thinks and if that was genuine, they wouldn’t have accepted the code of conduct initially,” she said. – Guardian