May dismisses fears that EU will reject her Brexit proposal 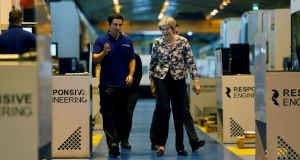 Theresa May has started a nationwide campaign to win support for her Chequers proposal on Brexit by telling engineering workers in northeast England that it would respect the decision to leave the EU while protecting the economy and keeping trade frictionless.

The UK prime minister said there had been “constructive responses” from Europe but her foreign secretary, Jeremy Hunt, warned in Berlin that the EU’s approach to the negotiations risked precipitating a no-deal Brexit.

Visiting the headquarters of an engineering group in Newcastle, Ms May dismissed fears that the EU would reject her proposal, which has faced fierce criticism from within her own party.

Asked about the likelihood of an economic downturn after Brexit, the prime minister said Britain’s economic future after it leaves the EU was in its own hands.

“We want to get that good deal with the European Union, but we have huge benefits here in the UK with our entrepreneurship, our innovation, our skill set, our workforces – we can really take those opportunities and have that brighter future. Many people said immediately after the referendum we would say a collapse in our economy, and in fact our economy has continued to grow. But as I say, our future is what we make it,” she said.

Ms May will travel to Austria later this week for talks with chancellor Sebastian Kurz, and other ministers will visit EU capitals in the coming days in an effort to win support for the Chequers proposal.

At a meeting at Chequers, her country residence, earlier this month, Ms May persuaded her cabinet to back a soft Brexit, maintaining full regulatory alignment with Europe for goods and agricultural products and treating Britain and the EU as a single customs territory. The plan led to the resignations from the government of foreign secretary Boris Johnson and Brexit secretary David Davis.

After a meeting in Berlin on Monday with his German counterpart Heiko Maas, Mr Hunt, the new foreign secretary, said the European Commission’s negotiating tactics threatened to make a deal impossible.

“There is now a very real threat of a Brexit no-deal by accident, and this is because many people in the EU are thinking that they just have to wait long enough and Britain will blink,” he said.

“Without a real change in approach from the EU negotiators we do now face a real risk of a no-deal by accident, and that would be incredibly challenging economically. Britain would find that challenging, but in the end we would find a way not just to survive but to thrive economically. But my real concern is that it would change British public attitudes to Europe for a generation.”

During a House of Lords debate on the Brexit negotiations on Monday, former deputy prime minister Michael Heseltine became the latest senior Conservative to call for a second referendum on the decision to leave the EU.

“Brexit is a disaster. There is no compromise with the Brexiteers. There never has been. There never will be. For my money here we stand and fight,” he said.