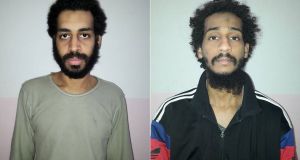 Labour has accused Britain’s home secretary Sajid Javid of “abhorrent and shameful” behaviour in agreeing not to seek an assurance that two British alleged jihadis would not face execution in the United States. Mr Javid wrote to US attorney general Jeff Sessions last month promising to provide evidence in the trials of Alexanda Kotey and El Shafee Elsheikh without seeking an assurance that they would not face the death penalty.

The two men are believed to have been part of a group of British-born foreign fighters known as the Beatles who filmed Islamic State beheadings in Syria. Britain does not customarily assist in US criminal trials on capital offences but security minister Ben Wallace told the House of Commons on Monday that seeking an assurance that they would not face execution could “get in the way” of bringing them to justice.

“The crimes that we are talking about involve the beheading and videoing of those beheadings of dozens of innocent people by one of the most abhorrent organisations walking this Earth. And simply to say, if we were unable to prosecute them in this country, that we should simply let them free to roam around the United Kingdom. is simply bizarre and not justice to the victims,” he said.

Shadow home secretary Dianne Abbott condemned the decision, pointing out that successive British governments had sought assurances that those who face justice in other countries should not face the death penalty.

“In an increasingly dangerous and unstable world, one of our strengths as a country is our willingness to stand up unflinchingly for human rights. It is a key aspect of our soft power, so the minister will understand the widespread concern that the government seems willing to abandon its long-standing principled opposition to the death penalty in this case,” she said.

“Either we offer consistent opposition or we don’t. This decision to abandon our principled opposition to the death penalty is both abhorrent and shameful, and I call on ministers even at this late stage to reverse this decision.”

Kotey and Elsheikh, who are from London but have been stripped of their British citizenship, were captured last January as they sought to flee Syria as the Islamic State’s strongholds in the country fell. They were part of a group of British jihadis that included Mohammed Emwazi, known as Jihadi John, who appeared in videos of the beheadings of US journalists and British aid workers and was killed in Syria in 2015.