In Beaconsfield, former Conservative MP Dominic Grieve is now running as an Independent after a dispute with the party over Brexit. His main rival is Conservative candidate and former actor Joy Morrissey. Video: Enda O'Dowd 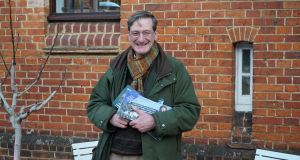 Former Conservative attorney general Dominic Grieve campaigning in Beaconsfield: “He is reckless, he is egocentric and he is, I’m afraid, a pathological liar,” he said of Boris Johnson. Photograph: Enda O’Dowd 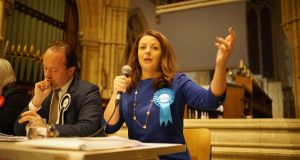 Conservative candidate Joy Morrissey, an American immigrant and former actor who starred in a low-budget comedy described by a UK tabloid as a “bonk fest”, says she sees Grieve as “really the independent Liberal Democrat candidate”. Photograph: Enda O’Dowd

“There’s that stupid man,” says the woman to her friend, after she passes former Conservative attorney general Dominic Grieve on Marlow’s main street in Beaconsfield, one of the UK’s wealthiest constituencies.

It is four days before the UK’s general election and Grieve is on a final campaign push.

The battle for the heart and soul of the Conservative Party that raged at Westminster over Brexit has spilled into this posh Buckinghamshire town. Here, in this Tory stronghold, lifelong Conservative Grieve, an unlikely anti-Brexit rebel, is seeking re-election as an Independent.

“Oy!” shouts the woman after Grieve, whose national profile (and popularity in Ireland) soared as a parliamentary thorn in the side of Theresa May’s government as he pushed for a second referendum on Brexit.

“I don’t like you. You stand in your seat and get elected and then betray the voters,” she snarls at Grieve, referring to his decision to stand for the Conservatives in the 2017 election on a promise of delivering Brexit.

“Have a leaflet,” he says, offering campaign literature in a bid to try to defuse the situation.

“No. That is betraying myself. You betrayed your voters,” she says.

“You did and you should be ashamed of yourself,” she says, before disappearing into a coffee shop.

Welcome to Tory Town where, prior to this election, the most dramatic thing that could have happened was a lorry getting stuck on Marlow’s famous suspension bridge over the Thames.

Beaconsfield has elected a Tory MP in every general election since 1974 and Grieve, a barrister, has held the seat since 1997. He was returned to Westminster with a majority of almost 25,000 in 2017. Brexit, which was rejected by 51 per cent of the people in Beaconsfield in 2016, has changed everything.

“It is a strange situation to be trying to undo your own majority of 25,000 which is built up over 22 years,” Grieve tells The Irish Times, standing on the bridge on a crisp, sunny winter afternoon.

The 63-year-old, one of 21 Tory MPs suspended by leader Boris Johnson in September for trying to block a no-deal Brexit, accepts that people are “fed up” with Brexit. “A nightmare,” he calls it. After 3½ years he understands why people want to just to “get it over and done with”. But he believes they are wrong to think that getting Brexit done by January 31st will “end the nightmare” and “reset” British politics.

Grieve recognises too that people do not trust the outgoing prime minister in this constituency, a dormitory town for London’s commuters. “Trust levels that really register at sub zero,” he says. But he knows they also see Labour leader Jeremy Corbyn as “a bogeyman” and so they are torn “between fear of Corbyn-led Labour government, fear of Brexit and fear of Boris Johnson turning out to be totally untrustworthy”.

His Conservative rival in the constituency – where voting Tory is as routine having breakfast – is Joy Morrissey. She is an American immigrant and former actor who starred in a low-budget comedy described by a UK tabloid as a “bonk fest”, a mix between American Pie and a Carry On film.

Speaking after a packed and at times nasty hustings in All Saints Church next to Marlow’s bridge, Morrissey says she sees Grieve as “really the independent Liberal Democrat candidate”.

The actual Lib Dem candidate, Rob Castell, a supporter of the pro-EU group Best for Britain, stood aside to make way for Grieve and increase the chances of Beaconsfield returning a remain MP.

“This is a very sad case of an Independent candidate having to prove that he is right rather than looking at the good of the party or wider country or respecting democracy,” says Morrissey, arguing the leaver’s case.

Grieve plays strongly into a clear public distrust of Johnson in Beaconsfield. At Monday night’s hustings, he unleashed a tirade against his former party colleague after one woman received the biggest cheer of the night when she asked the candidates whether a man who insulted working-class men and called gay men “tank-topped bum boys” was “really the man we want representing our country in the 21st century?”

“He is reckless, he is egocentric and he is, I’m afraid, a pathological liar,” answers Grieve, drawing a roar of approval and sustained applause in the packed church. He lies “on an almost daily basis”, he adds, through angry heckles.

“It worries me very much for the future of our country. We haven’t experienced anything like this,” he says.

Grieve is hoping that fears about Johnson and his leading a majority government will trump dyed-in-the-wool true blue allegiance to the Tories and Brexit fatigue.

“Just get Brexit done, just get out,” businessman Peter Mayer says, crossing Marlow’s bridge. “I was actually voted remain but there is just so much indecision now, it just needs to get done.”

A corporate fix-it guy for big projects, Mayer says business has dried up over general uncertainty around what might happen with Brexit. Clients have just stopped spending money; “too much indecision”, he says.

“I know Boris is the best of the worst choice but he is the one that gets through it,” he says, echoing a view heard several times from members of the public on the streets of Marlow and Beaconsfield.

“I am not sure I trust Boris that much but he is better than anyone else,” says John Smith, standing in the middle of Beaconsfield.

“When you are exhausted, any port in a storm – it is a clever strategy,” says TV writer Robert Thorogood, a lifelong Labour member who is canvassing with Grieve in Marlow to stop “hard Brexiteer” Morrissey.

“The problem we are finding is the message is so powerful and to counter it you need to use about five to six words but they stop listening after three because you are not saying ‘get Brexit done’.”

Stood-down Lib Dem candidate Rob Castell says he cannot understand why Grieve would not be “the preferred choice” of Conservatives here given that he was their MP for 22 years and has “absolutely denounced” Johnson. Grieve has even been endorsed by former Conservative prime minister Sir John Major.

Instead, it comes down to “the fact we are obsessed by the party system in this country”, says Castell.

Thorogood agrees, though he notes the biggest cheer of Monday night’s hustings was “against Boris Johnson as our prime minister”.

“There is definitely a feeling that he is a bad person but these people are Tories; they vote for the rosette – constitutionally, they have voted Tory their whole lives, they don’t know how to vote any different.”

Beaconsfield on Thursday will be an intriguing test of the rigidity of Britain’s party system.