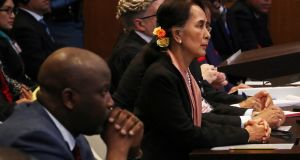 The Gambia’s justice minister Abubacarr Tambadou and Myanmar’s leader Aung San Suu Kyi attend a hearing in a case filed by The Gambia against Myanmar’s alleging genocide against the minority Muslim Rohingya population, at the International Court of Justice (ICJ) in The Hague. Photograph: Yves Herman/Reuters

Nobel laureate Aung San Suu Kyi will defend Myanmar’s military before the world on Wednesday when she addresses the UN’s top court to rebut shocking evidence of a premeditated campaign to wipe out her country’s Rohingya Muslim minority – a campaign her critics insist is continuing.

After sitting impassively through the first day of a landmark case alleging genocide brought by the west African state of The Gambia, Ms Suu Kyi – Myanmar’s civilian leader since 2016 – is expected to issue a staunch defence of the same military leaders who held her under house arrest for 15 years.

As rival groups of supporters kept vigil outside the International Court of Justice, the former “icon of democracy” sat in the front row of her delegation, facing the judges, while The Gambia opened its case, describing the alleged genocide as “a stain on the collective conscience of the world”.

“I stand before you to awaken that collective conscience and to arouse the voice of the international community”, said The Gambia’s attorney general, Abubacarr Marie Tambadou. “It is not just Myanmar that is on trial here - it is our collective humanity”.

Backed by the 57-state Organisation of Islamic Co-operation, The Gambia alleges Myanmar’s military carried out a “systematic” campaign of mass murder, rape, torture, and disappearances, forcing 750,000 Rohingya out of their homes and into Bangladesh in 2017 with “genocidal intent”.

Myanmar has rejected the allegations, saying that to the extent that its military was involved in a violent crackdown and “clearance operations” in Rakhine state, it was an entirely legitimate counterinsurgency against Muslim militants responsible for attacks on the police.

Ms Suu Kyi has consistently refused to condemn the military, describing those militants as “terrorists” responsible for “an iceberg of misinformation” – a reference to the state’s contention that some Rohingya burned down their own villages to blame the military for the destruction.

Appearing for The Gambia, Prof Philippe Sands QC said a significant body of evidence, much of it gathered by independent UN investigators and already dismissed by Myanmar, showed comprehensively that Myanmar was in contravention of the Genocide Convention of 1948.

All the members of the Rohingya ethnic group who were still in the country remained at risk, he said.

As a result, The Gambia was seeking an immediate order for “emergency measures” that would prevent “further irreparable harm”, before the court went on to decide the substantive issue of liability for genocide.

Accompanying the Gambian delegation are members of the Rohingya community, some of whom have travelled from refugee camps in Bangladesh.

Among the Rohingya protesting outside was Mohammed Rafique (33), now living in Ireland. Asked about Aung San Suu Kyi, he replied: “We are horribly disappointed in her. My uncle was shot dead in 2017. We are here for justice.”