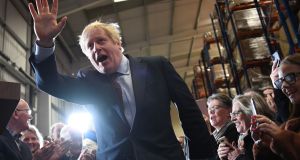 Prime Minister Boris Johnson: pocketed a reporter’s phone to avoid looking at a picture of a sick child on the floor of a hospital. Photograph: Stefan Rousseau/PA Wire

It’s two days to Election Day. Boris Johnson will be campaigning in Staffordshire today, warning of gridlock at Westminster if there is another hung parliament (“it’s time to send in the bulldozers”) and trying to move the story on from his disastrous day yesterday.

Johnson’s pocketing of a reporter’s phone to avoid looking at a picture of a sick child on the floor of a hospital dominated the TV news last night.

But although it makes the front pages of the Financial Times, the Guardian and the Daily Mirror, the story is buried inside the Tory-supporting Sun, Daily Mail, Daily Express and Daily Telegraph. Those papers friendly to the prime minister focus instead on his musings about scrapping the BBC licence fee, or at least halting prosecutions of those who don’t pay it.

That story was one of a number of Conservative distractions, which included an inaccurate briefing that a Labour activist punched an aide to health secretary Matt Hancock. Video footage emerged quickly to show the aide accidentally brushed against a gesticulating hand but not before a number of high-profile political journalists had tweeted out the false claim to their hundreds of thousands of Twitter followers.

But the story about the picture of four-year-old Jack Williment-Barr will continue to reverberate, not least because, as I argue here, it reinforces an impression shared by many voters that Johnson is dishonest and cold-hearted. It also links him to the Conservatives’ record in office over the past nine years, for which he has been trying to evade responsibility throughout the campaign.

Labour will attempt to keep the spotlight on the NHS today, publishing research showing the risk to patient safety from staff shortages and underfunding. The party blames the outsourcing of NHS services to private companies as well as insufficient government funding, promising to end privatisation, increase capital investment and increase staff numbers.

To do so, Labour must first get into government and with no apparent chance of winning a majority, the best it can hope for is to form a minority government. Shadow chancellor John McDonnell ruled out any coalitions, deals or pacts with other parties again yesterday. But promising that any new Brexit deal Labour negotiates would avoid borders in Ireland and the Irish Sea, he said he believed the DUP would support a minority Labour government.

Have video from Hancock leaving Leeds General just come through so you can see for yourself - doesn’t look like punch thrown, rather, one of Tory team walks into protestor’s arm, pretty grim encounter pic.twitter.com/hD1KwA72gG

“It will be up to other parties to actually take their decision on what aspects of that programme they’ll support and those that they don’t. Over the years I have worked with individual DUP politicians. I can’t see them voting against the real living wage, I can’t see them voting against the levels of investment that we want to put in right the way across the country, including Northern Ireland, ” he said.

Simon Carswell on a rancorous campaign in the Welsh marginal of Brecon and Radnorshire.

My piece on what Johnson’s phone stunt revealed about him.

Katy Balls in the Spectator on how the Conservative strategy is faring across the country.

Robert Shrimsley in the FT on Britain’s vanishing political centre.

“You’ve refused to look at the photo, you’ve taken my phone and put it in your pocket, prime minister. His mother says the NHS is in crisis. What’s your response to that?” ITV’s Joe Pike after Boris Johnson pocketed his phone rather than look at a picture of a sick, four-year-old boy lying on the floor of a hospital emergency department.

Boris Johnson campaigning in the West Midlands and the North West of England.

Jeremy Corbyn campaigning in the North West of England and in Scotland.