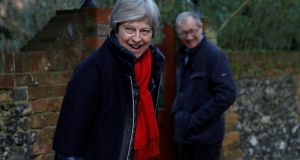 Britain’s prime minister Theresa May will chair two meetings of her Brexit war cabinet in an attempt to agree on what Britain wants from the next stage of the negotiations. Photograph: Reuters/Peter Nicholls

Conservative divisions over Brexit were on full display on Sunday ahead of a crucial week for negotiations between Britain and the European Union on their future relationship. EU chief negotiator Michel Barnier will be in London on Monday for talks with Theresa May and Brexit secretary David Davis. Ms May will chair two meetings of her Brexit war cabinet on Wednesday and Thursday in an attempt to agree on what Britain wants from the next stage of the negotiations.

Home secretary Amber Rudd hit out on Sunday at hardcore Brexiteers in her party who are threatening to move against the prime minister if she agrees to remain in any form of customs union with the EU. Ms Rudd, who campaigned to remain in the EU, said the cabinet subcommittee could agree on a compromise to limit barriers to trade.

“We published a document last year and we proposed either a customs arrangement or a customs partnership. Those are both alternatives we could look at. We do not want to have tariffs at the border, so that is a form of customs agreement, arrangement [or] partnership. It is likely to be something within the customs framework,” she told the BBC’s Andrew Marr Show.

She warned the prime minister’s critics against overestimating their strength, particularly within the Brexit war cabinet.

“I have a surprise for the Brexiteers, which is that the committee that meets in order to help make these decisions is more united than they think. We meet in the committee, we meet privately for discussions and I think we will arrive at something which suits us all.”

Ms Rudd’s intervention followed a report in the Sunday Times that Brexiteers were preparing to move against Ms May and to replace her with Boris Johnson. The report suggested that Mr Johnson would appoint fellow Brexiteers Michael Gove and Jacob Rees-Mogg as deputy prime minister and chancellor of the exchequer respectively.

Mr Rees-Mogg last month became chairman of the European Research Group, a caucus of backbench Conservative MPs who are pressing for a hard Brexit. He warned last week that any form of customs union with the EU after Brexit would be unacceptable. Fellow Brexiteer Bernard Jenkin went further on Sunday, warning the prime minister that she must hold to her commitment to leave the single market, the customs union and the jurisdiction of the European Court of Justice (ECJ).

“She can only command a majority in parliament on her present policy. Nearly half David Cameron’s MPs, voted leave, despite his patronage and pleadings. There would have been few remain Tories if he had advocated leave,” he wrote in the Sunday Telegraph.

“Her MPs will back her, because we are overwhelmingly at one with the majority of the British people who now want a clean Brexit and an end to the present uncertainty.”