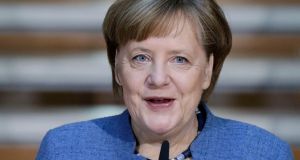 After more than four months of talks, crises and restarts, coalition talks in Berlin have gone down to the wire in a stand-off over health and labour market reform.

A Sunday evening deadline for agreement passed as the centre-left Social Democratic Party (SPD) played hardball with their once and possible future partner: the centre-right Christian Democratic Union (CDU).

After scoring their worst results since 1949, SPD and CDU leaders Martin Schulz and Angela Merkel are doomed to succeed. She needs SPD support in parliament to secure a fourth term and avoid fresh elections. But on election night last September, Mr Schulz vowed to rebuild his shattered SPD in opposition.

To justify a third grand coalition with the CDU, Mr Schulz is pushing for maximum concessions from the Merkel camp. Because, in the end, the future of Germany’s next federal government – and, the direction of the EU – doesn’t hinge on the 61.5 million registered voters, but 440,000 SPD members.

If a formal grand coalition deal emerges, SPD members will have two weeks to send in a postal vote. Depending on the vote, SPD leaders will have a mandate to sign – or orders to walk away.

Heading into Sunday talks, Dr Merkel professed her “goodwill” for a deal.

“But there is some expectation that there will be tough hours of talks ahead,” she said prophetically. Hours later, with the Sunday evening deadline looming, word leaked that negotiators would work through the night for a Monday agreement.

It’s deja vu all over again in Berlin. Three weeks ago, another all-night session produced a preliminary coalition agreement. But that was greeted with lukewarm support from SPD delegates, forcing Mr Schulz and his SPD team to push for more.

“We will have to negotiate very, very intensively today,” said Mr Schulz.

SPD left-wingers and its youth wing are campaigning to sink any deal that permits arbitrary hire-and-fire laws, often offered to younger workers. The CDU, meanwhile, is resisting demands to end Germany’s two-tier health system that, critics say, allows wealthier private patients buy their way to the top of the queue.

“We will either get a breakthrough on health or, personally, I see a bleak outlook for a grand coalition,” said Mr Karl Lauterbach, the SPD’s health spokesman.

On Sunday evening, senior CDU officials were sent out on a megaphone diplomacy mission, pointing to multibillion investment plans for education and house-building.

“I think we will have a coalition deal so attractive that I cannot imagine the SPD rank-and-file will be able to refuse,” said one.

But senior SPD officials say the only acceptable deal for them is one that makes a difference in the lives of ordinary people.

“Political apathy is huge and any new grand coalition has to find answer to this problem,” said Ms Manuela Schwesig, a state premier and senior negotiator.

After weeks discussing everything from pesticide to child allowance, a public television poll showed that 71 per cent of people do not understand “why forming a government is taking so long”.