At least two dead, 50 injured in US train crash 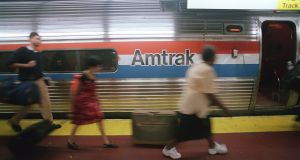 A two-train collision in South Carolina has killed at least two people and injured 50, according to reports.

In a statement, Amtrak said Train 91, operating between New York and Miami, collided with a CSX freight train at around 2.35am local time in Cayce, South Carolina.

The lead engine derailed, as well as some passenger cars, the operator reported, adding there were eight crew members and some 139 passengers onboard.