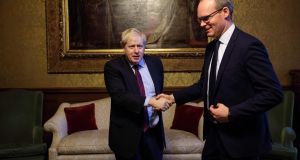 Britain is too proud and too powerful to be part of the European single market after Brexit without having a say in how it is run, Minister for Foreign Affairs Simon Coveney has told a London think tank.

Speaking at Chatham House on Wednesday, Mr Coveney said Britain should be ambitious and imaginative but also realistic in its expectations of a new relationship with the EU.

“Britain needs a say in the single market. I can understand that. I don’t see Britain ever being part of something that essentially the rules of which are decided by somebody else. Britain is too powerful, too big, too proud for that,” he said.

Mr Coveney, the Tánaiste, was speaking after a day of meetings with British politicians, including chancellor Philip Hammond and foreign secretary Boris Johnson. He said that Ireland would play a unique role during the next round of negotiations between Britain and the EU.

“I think we do have to play a role in ensuring that the EU understands the British mindset in the context of what’s possible in these negotiations. And I wouldn’t discount that influence in the context of the difficult negotiating period that’s coming up in the next few weeks,” he said.

Mr Coveney said Britain and Ireland should consider new bilateral structures after Brexit, including an annual meeting of both governments, arguing that such structures would help to maintain personal contacts between ministers who would no longer meet in Brussels.

“This annual summit of all senior ministers would allow for co-operation across a broad range of issues of shared interest – everything from energy to the environment, and from transport to technology and employment. It could also be prepared for in the preceding weeks and months by teams of officials from the relevant departments or ministries,” he said.

The proposal is similar to the annual Franco-German ministerial council, established in 2003, which brings together cabinet ministers from Berlin and Paris twice a year. Mr Coveney said that Brexit should not be allowed to be the sole determinant of British-Irish relations but he stressed that Ireland was confident that its destiny lay within the EU.

“Some commentators here have asked why – ‘having joined together in 1973, we shouldn’t leave together in 2019’ – as if the intervening 45 years of membership were of no consequence,” he said.