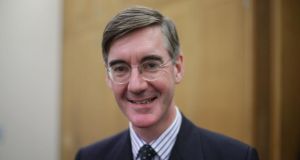 Tory leader-in-waiting Jacob Rees-Mogg’s attacks on the civil service reveal what Brexit is all about. Photograph: Yui Mok/PA Wire

Both sides of the Brexit debate are united on one thing: they have no idea what is going on. Everyone is suspicious that the vacuum at the heart of the UK government, also known as Theresa May, neither knows what she is doing nor what she wants.

When both the Financial Times and the Economist start to ask whether the UK government is capable of delivering any kind of Brexit at all we can begin to understand why politicians are either terrified of – or, in the case of Jeremy Corbyn, looking forward to – an election.

Brexit has morphed into an attack on the institutions and uncodified constitution of the UK. The expertise and impartiality of the civil service is questioned daily by the Tory ultras. We have been treated to a minister suggesting in parliament that he had had a conversation with an informed source, during which that minister was told the treasury was producing forecasts deliberately negatively disposed to Brexit. When an audio of the conversation appeared it became clear that no such allegation was made.

Garvan Walshe, a one-time Tory national and international security policy adviser and now a columnist on Conservative Home (not the typical CV of your usual woolly liberal Remainer) said this week that attacks by Steve Baker (the minister in question) and Jacob Rees-Mogg (Tory leader-in-waiting) attacks on the civil service revealed what Brexit is all about. He thinks it’s a “radical movement determined to attack the basic principles of constitutional democracy as we’ve come to practice it in the West”.

Walshe reveals himself to be almost unique: a Brit who understands the political and legal essence of the European Union. It has never been about the primacy of economics, important though that is.

The EU, he correctly opines, “was set up to secure peace and wealth in Europe by tempering the people’s desires through institutions. They were created after the alternative was tested to destruction.”

The big question for Walshe, and many others, is whether the UK can operate institutional government outside the EU – as opposed to rule by pitchfork wielding ideologues proclaiming to know the will of the people.

All of the evidence from the Brexiteers is, ironically, that they neither like the traditional British method of government nor do they know how to deliver it even if they did. Framed in this way, the questions around Brexit become even more profound: what does leaving the EU mean for the UK in political, social and economic terms?

Right now, it seems that the ground is shifting. It may be just a tremor but an earthquake seems possible. How the Tory party survives any type of Brexit is difficult to see. And that’s just one small unknown.

The economics become clearer by the day. A leaked civil service study revealed that it will be either bad or very bad. The government immediately rubbished the report, saying it had not modelled “cake and eat it”. The study used best-practice techniques and was widely praised by outside experts.

Those experts again. It’s a shame that “Project Fear” – treasury, OECD and International Monetary Fund forecasts of economic weakness – proved so wide of the mark that they are now used by the Brexiteers any time anyone models the impact of leaving the EU.

As it happens, some of those forecasts were more accurate than is currently claimed: the Bank of England’s numbers were not too bad, for instance. And that tiny band of “economists for Brexit” produced forecasts that were also inaccurate – optimistically so, of course. The pessimists got two things wrong: the willingness of UK consumers to run down their savings post-referendum and the emergence of a boom in that economic corpse also known as Europe.

Economic forecasts should be looked at in the same way we view weather and climate. Forecasts of the former are often wrong but the climate outlook is often broadly correct.

Similarly, the forecast that Brexit will hurt the economy is credible, based on everything we know about economics and has already proven correct.

Before Christmas, a meta-study by the Financial Times concluded that the economy was already £340 million (€385 million) a week poorer.

A more recent analysis by the Bank of England suggests that the costs are now accelerating and that the economy is now 1 per cent smaller than it would otherwise have been. That’s a lot of money lost, a lot of taxes not being devoted to the NHS.

That’s the bigger picture, which can be dismissed as mere expert opinion. But Brexit is as much about the details. British truckers are alarmed by the fact that, under current rules, they will be granted 1,200 permits to drive in the EU. For a fleet of 75,000 lorries.

But the battles are now political – who cares about the economics of Brexit? That leaked economic analysis was produced by models previously praised by chancellor of the exchequer Philip Hammond as having “informed some of the thinking that has gone into the 14 [Brexit] papers that have been published”.

As Chris Giles of the Financial Times says, it’s now about honesty. There is an economic price for Brexit which must be admitted to. Or not. And dishonesty must necessarily involve rubbishing the civil service, trashing the institutions of government and promising some economic nirvana supported by nothing other than hot air.