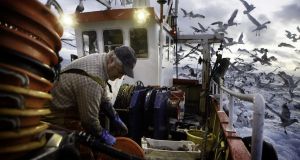 Continuing reciprocal access to both EU and UK waters is seen as crucial by EU negotiators, who point to the joint management of around 100 shared fish stocks. Photograph: Annie Sakkab/Bloomberg via Getty Images

“Any free trade agreement should be balanced, ambitious and wide-ranging . . . A level playing field must be ensured, notably in terms of competition and state aid, and in this regard encompass safeguards against unfair competitive advantages through, inter alia, tax, social, environmental and regulatory measures and practices.”

What if, in the aftermath of Brexit, the UK opts to repudiate EU agreements on sharing tax information and to cut its corporation tax rates to lure international investors? To become, in EU eyes, a tax haven?

Or decides to repudiate obligations to curb greenhouse gas emissions, requiring of its old partners, according to EU Commission estimates, a not-inconsiderable increase of 9 per cent more effort to reach their binding targets – “a potential €4.7 billion gain for UK industry per annum in reduced direct costs. . . whilst increasing pollution for neighbours”?

Or to tear up workers’ bargaining rights to drive down wages?

Unleashed from EU “constraints”, it’s what some in the UK dream of: a “regulatory bonfire” to free the hands of trade negotiators to woo the rest of the world.

And, although Brexit secretary David Davis has publicly hoped to maintain standards and, for a while a least, “regulatory alignment” between the UK and the EU – and the UK has committed to it in the phase one agreement on the Irish Border – the UK’s aspirations for the shape of a “future relationship” with the EU remain completely unclear.

What it wants of the EU, and how it proposes to reshape its own economic, environmental, and social models post-Brexit, remain veiled in the clouds of internecine Tory warfare.

And so the EU must prepare for the worst, albeit in the hope that the more radical countermeasures or sanctions under consideration – such as blacklisting the UK as a non-co-operating tax state or fining companies that break state aid rules  – will never be necessary.

Over the last two weeks the EU’s Brexit negotiating task force has conducted a series of seminars for the 27 remainer states on key aspects of the looming “future relationship” talks guidelines. These meetings, focusing much more widely than simply on traditional trade measures, have included discussions ranging from “the level playing field”, “governance”, “fisheries” and “defence and security” to “judicial cooperation” and “aviation”.

The task force’s presentations to these seminars, a series of slides summarised below, reflect its thinking on new negotiating guidelines under preparation – and underline both the challenge of the more potentially malign scenarios, but also the huge range of issues which will need to be covered if a future relationship deal is to be agreed.

In the absence of a deal, the task force warns that “international rules do not adequately address the [potential] distortive effects of subsidies on investment, trade and competition”, and insists that “the EU-UK agreement will have to include robust provisions on state aid to ensure a level playing field”.

It argues that the future-relationship deal will have to contain “binding requirements” on information-sharing, anti-tax-avoidance measures and transparency. The UK is “likely to use tax to gain competitiveness”, and the task force notes it is already a low-tax economy with a “large number of offshore entities”.

An agreement should contain a good tax governance clause, commitments to a code of conduct on business taxation, anti-tax avoidance measures, and requirements for public county-by-country reporting by banks, credit institutions and investment firms.

The task force also stresses the need for measures to ensure no erosion in standards of environmental and labour protection, no “race to the bottom”, “undermining Europe as an area of high social protection”.

It warns of the dangers that the UK could opt for reducing information and consultation rights for workers to reduce cost and delays for collective dismissals.

Workers could also see an erosion in collective bargaining, working conditions, social security contributions and labour inspections, resulting in lower protection; it cites specifically the danger that the UK, in pursuit of lower production costs and competitive advantage, would allow higher exposure to chemicals and carcinogens.

To prevent such threats, the taskforce points to the anti-backsliding, “non-regression” clause in the EU Japan agreement as a model for the EU-UK deal. “The parties shall not encourage trade and investment by relaxing or lowering the level of protection provided by their respective domestic environmental or labour laws and regulations.”

The task force points to challenges to agreement on how a future relationship will be interpreted and policed, complicated not least by a UK aversion to any involvement in the EU’s European Court of Justice (ECJ).

Although the most basic management of the relationship can be conducted by means of joint committees between the EU and UK, different models of dispute resolution and arbitration systems currently apply to different trade deals.

With Canada, for example, following a dialogue phase, disputes can be submitted to binding arbitration. There is no involvement of the ECJ.

The European Economic Area (EEA) and the overlapping  European Free Trade Association (EFTA) are another matter. The relationship leans heavily on EU law and EU law concepts. Disputes between EU and EEA/EFTA countries go to a joint committee.

When it is unable to settle a dispute within three months, if it concerns treaty provisions that are identical to EU law, parties can jointly submit to the ECJ. If the dispute concerns other provisions, each party can submit it to arbitration.

Much of the UK’s involvement currently in judicial co-operation is on the basis of treaty “opt-in” provisions. In the transition period, the UK would remain bound by acts applicable to it at the time of withdrawal, but could not opt in to new measures. It is not, and would not be, part of the Schengen passport-free travel area.

The UK position is that it would like to maintain a “deep and special partnership” in bodies such as Europol and Eurojust, the EU’s Hague-based law enforcement agencies which assist and co-ordinate respectively the work of police and judicial/prosecuting authorities.

Precedents will mean the UK losing its board membership of such bodies, although it could retain observer status. It will be possible to exchange data and appoint liaison officers, but not for it to have automatic access to databases or the Eurojust Case Management System or case files.

The European arrest warrant system of extradition currently works through automatic recognition of member state judicial decisions and prompt surrender of those sought through direct contact with judicial authorities in each country. The UK’s departure will see both sides reverting to relying on the more cumbersome extradition procedures of the past through diplomatic channels.

The task force paper insists that the UK’s departure will not create a “security vacuum”. It says there will be no impact on the EU-Nato strategic partnership, and points to an “unconditional UK commitment to maintaining European security”.

But it warns that the loss to the EU of one of its two permanent members of the UN Security Council, and the continuing need to co-ordinate sanctions such as those against Russia, makes a new dialogue and consultation mechanism with the UK particularly important.

The UK has said it wants to remain part of the EU’s military missions under the Common Security and Defence Policy (CSDP), but it will not be allowed to be “lead nation” or have high-level positions in operations. It will also have to relinquish the HQs it provides for two operations.

A new agreement on exchanging classified information and on access to the Galileo satellite system will be needed. And agreement for UK involvement in the new Pesco military co-operation framework will provide for a case-by-case role.

The UK has expressed strong interest in remaining part of the EU “open skies” system and, specifically, the safety regulator. The integrated EU air travel market is based on three elements that are difficult to replicate from outside the EU: 35 shared laws, a common regulator in the European Aviation Safety Agency (EASA), and a common court to apply shared rules, the European Court of Justice.

Ryanair has warned that in the absence of a new agreement between the UK and EU – or the UK’s willingness to negotiate to remain part of the European Common Aviation Area, as some non-EU states have done, it may lose access to many crucial hub slots in London and the UK vital to its international operations.

Brexit could deny British airlines the ability to fly into many EU airports or the right to pick up passengers there. No deal on aviation would also mean third country restrictions on ownership would kick in.

The task force report insists that the UK’s degree of market access will be conditional on its regulatory convergence/alignment.

Continuing reciprocal access to both EU and UK waters is seen as crucial by EU negotiators, who point to the joint management of around 100 shared fish stocks.

Currently EU fishermen land some €585 million in fish and seafood from UK waters, while the latter’s boats take €127 million from EU27 waters. But imports in both sides are much more equal. The UK imports €1.31 billion from the EU (34 per cent of UK seafood imports but only 6.7 per cent of EU exports). while the UK exports €1.34 billion to the EU27, two-thirds of its seafood exports.

The talks’ purpose will be to ensure continued reciprocal access to waters, resources and markets, and agreement on how to determine fishing opportunities “with regard to historic fishing patterns and past records of activity”.

The discussions will have to range over provision for joint multi-annual plans, agreements on discards, stakeholder consultation, fleet management, joint controls, data collection and scientific co-operation.