Theresa May officially resigns as Tories suffer another setback 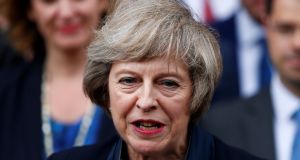 Theresa May: hopes to use her remaining weeks in office as caretaker for some domestic policy actions. Photograph: Neil Hall

Theresa May has officially resigned as Conservative leader after three years, as her party suffered a fresh electoral setback, coming in third behind Labour and the Brexit Party in a byelection in Peterborough. The leading candidates to succeed her said the byelection showed that the Conservatives must deliver Brexit or risk putting Jeremy Corbyn’s Labour Party in power.

Labour held the seat with 31 per cent of the vote, just 683 votes ahead of the Brexit Party, with the Conservatives in third place with 21 per cent. The byelection was triggered by a recall ballot after former Labour MP Fiona Onasanya was convicted of lying about a speeding offence.

Labour’s winning candidate, Lisa Forbes, apologised during the campaign after it emerged she liked an anti-Semitic Twitter post that said Mrs May had a “Zionist slave masters’ agenda”. Nigel Farage’s Brexit Party had been favourites to win the seat, which backed Brexit by more than 60 per cent in 2016, but Mr Corbyn said voters had responded to Labour’s focus on local and economic issues.

“Everybody, all the experts, wrote Lisa off. All the experts wrote Labour off yesterday. Write Labour off at your peril. We are strong, we are very determined to offer that politics that invests in decent services, in decent housing, in decent healthcare and in good-quality jobs for the future, and a relationship with Europe that doesn’t take us over a cliff edge,” he said.

“The Labour Party came together in this campaign. And, on the day that Theresa May ceases to be leader of the Conservative Party, my message is, to all the squabbling contenders for the Tory party leadership, bring it on. We are ready for a general election. And that general election will deliver a Labour government that will work for the many.”

Nominations for the Conservative leadership close at 5pm on Monday and candidates need a proposer, a seconder and the support of six other MPs to win a place on the ballot. The names of the proposer and seconder will be public but those of the six supporting MPs will remain private.

MPs will vote in a series of eliminatory ballots to choose two candidates to go before the entire Conservative membership, with the new leader expected to be elected in late July. Mrs May will remain prime minister until then and she hopes to use her remaining weeks in office for some domestic policy actions.

These include increased education spending, improvements to mental health services and more generous parental leave. Chancellor of the exchequer Philip Hammond is reported to be resisting the prime minister’s initiatives, which would cost billions of pounds.