Vigil to commemorate Tiananmen crackdown and protest against extradition Bill 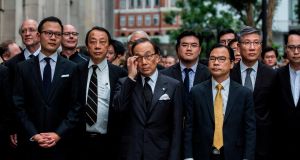 Lawmakers and lawyers march to the central government offices in Hong Kong to protest against the government’s plans to approve extraditions with mainland China, Taiwan and Macau. Photograph: Isaac Lawrence/AFP

Hong Kong is bracing itself for a weekend of high emotions and streets thronged with protestors as a vigil for the victims of the 1989 Tiananmen massacre coincides with anger over a looming extradition Bill, which many feel could facilitate the Chinese government’s persecution of dissidents in Hong Kong.

The current extradition legislation excludes China from any arrangement, but a proposed amendment would open the door to extradition between Hong Kong and Beijing.

More than 70 NGOs wrote an open letter to Hong Kong’s leader, Carrie Lam, saying that the proposed amendment was a threat to human rights and should be dropped.

“China’s justice system has a record of arbitrary detention, torture and other ill-treatment, serious violations of fair trial rights, enforced disappearances and various systems of incommunicado detention without trial,” they said.

A protest rally planned for Sunday – with the twin aims of commemorating the 30th anniversary of the Tiananmen crackdown and protesting against the proposed rendition Bill – is expected to attract hundreds of thousands of people.

On Thursday, about 3,000 Hong Kong lawyers, prosecutors and legal students staged a silent protest march against the Bill. Clad in black, they marched noiselessly through the city and observed three minutes of silence when they reached the government’s headquarters in Admiralty.

Hong Kong’s government has argued the Bill must be passed quickly to bring 20-year-old Chan Tong-kai to justice for the murder of his girlfriend when the two were on holiday together in Taiwan last year. Hong Kong currently has only 20 extradition treaties in place, including one with Ireland.

Chan has admitted to the murder but Hong Kong police cannot extradite him as there is no agreement in place with Taiwan. The new proposal would give the city’s chief executive legal powers to send suspects to jurisdictions not covered by existing treaties on a case-by-case basis.

Critics of the Bill argue that the chief executive, who is selected by a Beijing-controlled committee, would be obliged to support any extradition request coming from China.

Chan is in a Hong Kong prison on money-laundering charges, but he could be released as early as October, so the chief executive is aiming to push the Bill through before July.

Even if the Bill is passed, Taiwan has said it would not endorse it nor request Chan’s extradition, fearing the Bill would represent a danger to Taiwanese citizens living in or travelling through Hong Kong who could become targets for Beijing. Taipei and other critics of the Bill suggest that more specific legislation could be introduced to handle cases such as Chan’s, without attaching the risks in this proposal.

Under the “one country, two systems” policy in place since Britain’s handover of Hong Kong to Beijing 22 years ago, the city’s independent legal system should remain intact until 2047, but pro-democracy campaigners point to a litany of incidents that they say prove their autonomy is being chiselled away day by day.

As the controversial Bill goes back to the legislature next week for a second reading, there is mounting alarm for the city’s rule of law and relatively free society.

The business community fears that the proposed changes will damage international confidence in Hong Kong. NGOs – including Amnesty International, Human Rights Watch and Human Rights Monitor – wrote in the open letter that they were worried it will put at risk “anyone in Hong Kong who has carried out work related to the mainland, including human rights defenders, journalists, NGO workers and social workers, even if the person was outside the mainland when the ostensible crime was committed”.

Last month a brawl broke out in Hong Kong’s legislature during a debate on the Bill, leaving several lawmakers injured and at least one hospitalised.