Germans enjoy their Greens as party surges past Merkel’s CDU 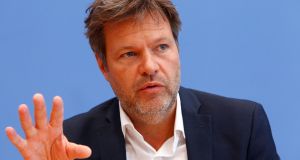 Green Party leader Robert Habeck sees his party’s success in its independence from a high-tax, low-tax, left-right political model that has left the CDU and SPD parties ‘trapped in the 1980s’. Photograph: Michele Tantussi/Reuters

Life is beginning at 40 for Germany’s Greens as, for the second time in a week, an opinion poll crowned it the country’s most popular political party.

The news caused elation among party’s MPs in the Bundestag on Friday – and added to speculation of a premature end to chancellor Angela Merkel’s struggling grand coalition.

Germany’s governing parties, once political giants, now together command just 37 per cent support. Some three-quarters of Germans are dissatisfied with the fourth Merkel administration and third grand coalition since 2005.

As the coalition parties struggle – one with its new leader and the other with none – the Green Party has received an early present six months before its 40th birthday: a tripling of public support since the 2017 federal election.

Founded in January 1980 from Germany’s pacifist and environmental movement, it served as a junior partner in Berlin for seven years until 2005.

But its junior days may be over after doubling its European election support to 20.5 per cent. A week ago, for the first time ever, the party pulled ahead of Merkel’s ruling Christian Democratic Union (CDU) in an opinion poll.

Those who dismissed that as a statistical fluke have now been silenced by a new Deutschlandtrend poll, for Germany’s ARD public television. It shows the Greens nosing one point ahead of the CDU to 26 per cent.

That poll was released an hour after a second poll, for Germany’s second public broadcaster ZDF, also placed the Greens on 26 per cent – one point behind the CDU.

The Green Party is no stranger to opinion poll surges and slides but the three surveys, on foot of a Europe-wide surge, suggest to Robert Habeck, the party’s co-leader, that Germany is following a shift into a new political era.

He sees his party’s success in its independence from a high-tax, low-tax, left-right political model that has left the CDU and Social Democratic Party (SPD) “trapped in the 1980s”.

Voters appear to agree: 27 per cent of Germans believe the Greens have the answers to important future questions, according to the ARD poll, compared to 12 and 2 per cent who trust the CDU and SPD respectively.

What makes this Greenquake different is its spread to unlikely corners of Germany.

In its postwar history Bavaria has been firmly in the hands of Merkel’s Christian Social Union (CSU) allies. In rural regions like Frankonia, the Greens were mocked as finger-wagging city slickers with unrealistic notions. No more. Green Bundestag MP Manuela Rottmann, elected for the Lower Franconia region, notices new, older voters at her events rethinking the kind of politics Germany needs.

For them fair milk prices or the cost of monoculture, single-crop farming on bee populations are not abstract topics for talk shows. They are part of the reality they see around around them in rural Germany.

“The push for ever-more consumption held postwar society together, but now people are asking: ‘is there a meaning to life beyond consumption?’” said Rottmann.

Newer Green voters are motivated by their children’s and grandchildren’s climate-change anger. Others are calling time on postwar Germany’s glut of cheap food – a response in part to the trauma of wartime hunger – as an unacceptable burden on animals, farmers and the environment. Even Germany’s holiest of cows – the car – is no longer untouchable.

“Some 20 years ago when we discussed public transport people thought ‘they want to take our cars from us’,” said Rottmann. “People saw mobility then as a freedom but now, increasingly, as a burden. They are asking why they have to be so mobile and whether it would be good to do something for regional areas as well as urban centres.”

Meanwhile the ARD poll put the SPD, a week after its leader resigned, in fourth place behind the far-right Alternative für Deutschland (AfD).