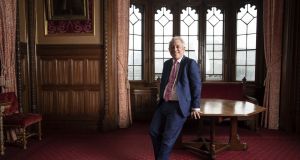 John Bercow: ‘Parliament will not be evacuated from the centre stage of the decision-making process.’ Photograph: Dan Kitwood/Getty

House of Commons speaker John Bercow has warned Conservative leadership candidates they will not be able to suspend parliament to stop MPs from blocking a no-deal Brexit. Mr Bercow was speaking after former Brexit secretary Dominic Raab refused to rule out proroguing parliament to ensure that the UK leaves the European Union on October 31st.

“Parliament will not be evacuated from the centre stage of the decision-making process on this important matter. That simply is not going to happen, it’s just so blindly obvious it almost doesn’t need to be stated,” Mr Bercow told the Commons on Thursday.

Other candidates condemned Mr Raab, who is competing with Boris Johnson for the support of hardline Brexiteers and has promised to take Britain out of the EU on schedule, with or without a deal. International development secretary Rory Stewart said the idea of proroguing parliament was “as disturbing as it is ludicrous”, and health secretary Matt Hancock wrote to all other candidates calling on them to rule it out.

“To suspend parliament explicitly to pursue a course of action against its wishes is not a serious policy of a prime minister in the 21st century. What kind of message would this send around the world about our values when so many have given so much for the rights of democratic freedom?” Mr Hancock said.

Theresa May will resign as Conservative party leader on Friday but will remain acting leader and prime minister until her successor is chosen. Nominations close next Monday, with hustings before the backbench 1922 Committee on Tuesday and Wednesday and the first round of voting on Thursday.

The committee has gone to great lengths to prevent voter fraud, insisting that MPs show their parliamentary pass to vote and printing ballot papers for each round on a different-coloured paper, with the colour decided the night before each ballot. The committee’s acting joint chairs, Charles Walker and Cheryl Gillan, set out a timetable on Thursday that allows for up to six ballots for MPs to choose two candidates to go before the entire party membership.

Mr Walker said the committee wanted to avoid a repeat of the contest in 2016 when party members were not involved because Andrea Leadsom withdrew, leaving Mrs May as the sole remaining candidate.

“The expectation is that if they are in the final two, they will put themselves through the membership hustings. We’ve had a conversation with those who have indicated they are going to put their papers in. There is a great recognition across the parliamentary party that this does need to go to the membership this time. Potential candidates are fully aware of that and hopefully relishing the prospect,” he said.

Eleven candidates remain in the race after two withdrew this week but candidates need the support of at least eight MPs to get on to the ballot. The party hopes to have a new leader in place in the week beginning July 22nd.