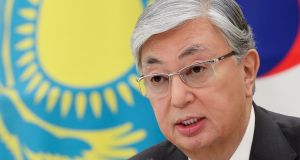 The people of Kazakhstan will vote in a snap presidential election on Sunday that Kassym-Jomart Tokayev, the acting president of the central Asian country, will almost certainly win.

The poll marks a decisive moment in a highly choreographed power transition that began when Kazakhstan’s former president Nursultan Nazarbayev unexpectedly resigned in March this year.

Mr Nazarbayev, who ruled Kazakhstan for three decades, first as Soviet communist boss and then as the country’s first president, has supported Mr Tokayev’s candidacy, describing the former senate speaker as a “worthy” successor. But whoever wins the presidency will have to reckon with Mr Nazarbayev who has retained influential positions as chairman of Kazakhstan’s powerful security council, the ruling party Nur-Otan and the nation’s $60 billion sovereign wealth fund.

The original plan was for Mr Tokayev to serve as interim leader until the end of Mr Nazarbayev’s fifth presidential term in 2020. Many observers believed that Mr Nazarbayev’s daughter, Dariga Nazarbayeva, who has replaced Mr Tokayev as head of the senate, would then become president.

However, a rare wave of protests that erupted after Mr Nazarbayev resigned prompted a change of course with Mr Tokayev calling a snap poll to end uncertainty about the power transition.

Mr Tokayev has pledged to oversee a competitive election, but with the authorities clamping down on opposition activism and independent media, the poll is unlikely to be different from those fought and won by Mr Nazarbayev that were condemned by independent observers as neither free or fair.

Five candidates are challenging Mr Tokayev on the ballot, but most are believed to be proxies installed by the authorities to give a veneer of political choice.

An exception is Amirzhan Kosanov, a journalist, poet and opposition activist who has been criticising the authorities for more than 20 years. He has pledged a sweeping overhaul of the regime to uproot corruption, reduce the sprawling bureaucracy and ensure government accountability.

Election campaigning has been low-key, limited to posters and billboards of some candidates, according to the Organisation of Security and Economic Co-operation in Europe which has deployed observers in Kazakhstan to monitor the poll. Mr Tokayev is featured in some posters alongside Mr Nazarbayev emphasising continuity of social, economic and foreign policies.

Mr Kosanov said this week that he enjoyed the backing of many businessmen, but most have declined to help finance his campaign for fear of official reprisals. Instead he has reached out to voters on the internet. “The president should not be affiliated with any oligarch or clan, but protect the [state] budget and reveal his earnings to the people,” he said.

Government-controlled polls predicted this week that Mr Tokayev would win 72 per cent of the vote leaving Mr Kosanov far behind with 7.9 per cent.

“If the election was free and fair, Kosanov would easily win enough votes to force a second round,” he says. “There is huge demand for change in Kazakhstan. People are totally fed up with the Nazarbayev era.”

Police have cracked down heavily on protests in the past two months and are braced for more clashes in the days ahead. Tight security measures have been introduced in major cities including the capital – formerly known as Astana but renamed Nur-Sultan by Mr Tokayev in April honour of his mentor.