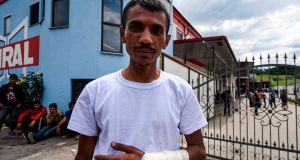 Pakistani migrant Nadeem Ijazz (20), who was injured in a burned shelter for migrants, poses in the town of Velika Kladusa, in northwest Bosnia. Photograph: STR/AFP/Getty Images

International organisations say many migrants in Bosnia face a dire situation as a lack of state accommodation leads thousands to sleep rough, fuelling health and security concerns on a now tightly guarded southeastern edge of the European Union.

Twenty migrants were arrested and about 10 hurt during a mass brawl involving about 100 people at the Miral accommodation centre near Bosnia’s border with Croatia on Wednesday. Three policemen were also injured.

The fighting came just days after a fire at the facility injured several people, including two who leapt from the burning building. Police say the blaze probably started accidentally while a migrant was cooking food.

Bosnia registered the arrival of only 755 migrants and refugees in 2017, but stricter border controls around the region prompted the so-called Balkan route to redirect through the country last year, sending that number soaring to 25,000.

The rate of arrivals this year has been even faster and is accelerating as the weather improves, leaving thousands of migrants stuck in Bosnia’s northern Una-Sana canton as EU member Croatia ramps up security along the nearby border.

Peter Van der Auweraert, representative of the UN’s International Organisation for Migration (IOM) in Bosnia, says that 8,945 migrants entered the country from the start of this year until June 2nd; over an almost identical period last year, the UN reported that 5,290 migrants arrived in Bosnia.

He said about 6,000 migrants are now in Una-Sana canton, but there is only official accommodation for 3,000-3,500 people, leaving thousands to fend for themselves in rented accommodation, abandoned buildings and parks and woods.

“I’m concerned that the situation is going to get out of hand,” Mr Van der Auweraert told The Irish Times.

“They face health issues because they’re not being [medically] screened, they’re not living in safe conditions, they’re frustrated, they could be using alcohol and drugs,” he said of the people sleeping rough, most of whom are young men.

“This issue will get bigger because Croatia has increased its border controls in recent weeks . . . I’m really worried we’re going get more and more people in Una-Sana canton without the expansion of official accommodation that we’ve been asking for.”

The IOM and other agencies have urged Bosnian officials for months to prepare for another spike in arrivals, but politicians have been unwilling to do anything that could be construed as encouraging migrants to come to the country.

“Overall the situation is dire but accommodation centres are there and they are well run. That is good but unfortunately, due to lack of political decision-making, we have a deteriorating situation with people living outside due to a lack of beds.”

“People are sleeping in parks, in car parks, on the footpath, and in dangerous buildings,” she said.

“We are extremely concerned for people on the move in Bosnia . . . They are arriving in poor condition, and many, including children, have walked for weeks. They are hungry, exhausted, sick and cold and traumatised by their journeys.”