The more London’s lockdown eases, the clearer the crisis becomes 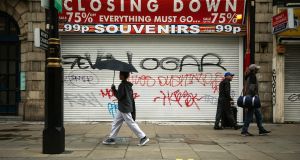 With the London Stock Exchange on one side and Goldman Sachs on the other, Paternoster Square is at the heart of the financial services industry in the City of London, and should usually be humming with commerce at 11am on a weekday morning. But as working from home remains the norm in the City as well as in other parts of the British economy, most of the Square Mile’s office buildings are empty, and the square was desolate on Thursday.

A short burst of rain helped to drive the handful of people on the square indoors, leaving a tall, bearded man selling the Big Issue standing alone. He seemed surprised to be asked for a copy, and when I asked him how he was he said “damp”.

Many of the shops in One New Change, a shopping centre next to the square, were open, but none appeared to have any customers.

“We’re so glad to see you. Please be patient while we limit customer numbers in the store,” a sign at the door of Calvin Klein said, while three sales assistants stood chatting inside the empty shop.

St Paul’s Cathedral is open for private prayer between 11am and 3pm, and visitors passing through a gazebo outside receive a squirt of hand sanitiser as well as a security check on their way in.

Inside only a small area at the western end of the church is open to visitors, with chairs spaced two metres apart in front of stands of votive candles.

During any other July the cathedral would be full of foreign tourists, who would also help to sustain local shops and restaurants. They too are gone, with no early prospect that they will return.

When pubs and restaurants reopened last Saturday, lively crowds outside bars in Soho made for good pictures that appeared to realise Boris Johnson’s fears of a “roiling, bacchanalian mass of people that can spread the disease”. Yet a few metres away on the other side of Oxford Street and it was as bleak as a rainy Sunday night in March, with everywhere almost deserted.

On the terrace of a Polish restaurant in South Kensington the following day, adherence to the safety protocols was discreet, and because it was outdoors the staff were not wearing masks. Yet the appearance of normality was deceptive because the restaurant is left vulnerable by the fact that much of its trade comes from the Proms in the summer and Imperial College during the rest of the year.

The Proms will return to the Royal Albert Hall in a few weeks, but with no audience or one much reduced from the usual thousands of people a night. Imperial College is running all classes online until at least January.“I don’t know what we’re going to do,” the waiter said.

At our local Spanish restaurant the staff wore masks and gloves as well as their usual long aprons, giving it something of the atmosphere of an operating theatre.

They stood as far away as they could as they brought the food, carefully setting the dish on the edge of the table, before pushing it across as if they were feeding a dangerous dog.

They had 20 customers on Saturday, six on Monday and 12 on Tuesday, and the head waiter was getting anxious.“There are no tourists, no students, no hotels, nobody coming here for meetings,” he said.

He was hoping business would improve in September, and he acknowledged that government measures like a business rates holiday were a help, but the numbers this week would not cover the cost of staying open.

Many of the neighbourhood’s other restaurants are still closed, but the local wine merchant said one old favourite was waiting until next month, while another showed no sign of life.

Rishi Sunak’s economic statement this week included a number of measures targeted at the hospitality industry, including a cut in the VAT rate from 20 per cent to 5 per cent. During August the government will pay half the cost of restaurant meals up to a maximum of £10 a head in a scheme called Eat Out to Help Out.

The measures are designed to encourage consumers to believe it is safe to eat out again, as well as offering support to a sector that has suffered more than almost any other.

But the government’s faltering response to the coronavirus pandemic has left the British public fearful of returning to normal life, and fewer than a third plan to take advantage of the Eat Out to Help Out discount, according to YouGov.

London’s retail and hospitality sectors face ruin unless workers return to their offices. But with two out of three people in Britain saying they believe the lockdown is still going on, there is no sign of them coming back to work any time soon.