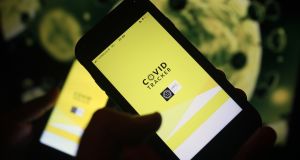 The Covid Tracker Ireland app has been downloaded more than 1 million times since it was released in the Apple and Android app stores on Monday evening. Photograph: PA Wire

The Republic’s Covid Tracker app will be able to swap information with the app for Northern Ireland when the latter is released in coming weeks, the HSE has confirmed.

This comes as Nearform, the Waterford company behind the app in the Republic, works with health authorities in the North and in other locations to develop similar technologies. The apps in the Republic and the North will use the same source code.

There were concerns that the use of separate apps in Northern Ireland and the Republic would cause issues for people living in Border areas, and people travelling between the two jurisdictions.

HSE chief information officer Fran Thompson confirmed the State’s app would work in tandem with the Northern app, which is being readied for release.

“We will have interoperability between the two jurisdictions,” he said. “They’ll exchange those [bluetooth] keys.”

The Covid Tracker Ireland app has been downloaded more than 1 million times since it was released in the Apple and Android app stores on Monday evening. Although Apple did not comment, industry experts believe the app holds the record for the most downloads in a single day in Ireland on the App Store.

The app works by using the bluetooth signal on your phone to exchange a digital “handshake” with another device also running the Covid Tracker app when users come within two metres of each other for more than 15 minutes.

The anonymous keys are stored in a log on the phone, which the HSE may ask users to upload if they receive a positive diagnosis for Covid-19. That log can then be used to track unnamed contacts, with an alert delivered to affected people through the app. Google and Apple worked on technology to allow their devices to exchange information, using a system called exposure notification services.

In Britain, government technology unit NHSX scrapped its plans for a centralised contact tracing app last month, with the British government confirming it would work on a second app using the Google and Apple exposure notification technology.

“There’s a lot of international cooperation and support around this one,” he said. “We’ve got help from people and provided help to people as well.”

The source code for the app may also be used in other regions in the future, including the US, with Mr Thompson saying there were talks with other countries taking place.

1 Moving in and out of lockdown is a recipe for economic disaster
2 Objectors stall production of enough timber for 1,000 houses
3 AIB concedes Covid mortgage policy was ‘regrettable’
4 Harvey Norman targets Irish property developers
5 ‘No demand... because there are no people’ at well-known Dublin pub
Real news has value SUBSCRIBE