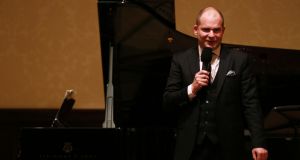 On the stage of Wigmore Hall, beneath its painted cupola depicting the Soul of Music, a piano tuner in a black apron was bent over the resident Steinway Model D. Towards the back of the hall, a video camera sat on a tall tripod and a third of the way down the left aisle was a small table and a chair.

On the table stood an anglepoise lamp, a clock, a pair of headphones, a red light and a bottle of hand sanitiser for use by BBC Radio 3 presenter Martin Handley. When tenor Mark Padmore and pianist Mitsuko Uchida perform Schubert’s Winterreise at 1pm on Friday, Handley will be one of just two people in the auditorium.

The other will be Wigmore Hall’s Limerick-born director John Gilhooly, who has brought live music back to London during the lockdown with 20 concerts streamed on the hall’s website (wigmore-hall.org.uk) and broadcast on Radio 3. Friday’s will be the last in the series.

“I felt that should be the last concert because it’s the winter journey and this has been a bit of a winter journey, even in the middle of June. It’s possibly not the most positive note to end on, but it kind of reflects the times,” Gilhooly said.

He said the popular response to the concerts has been “incredible” with some performers receiving hundreds of messages after performances, many of them from other musicians and a new audience discovering Wigmore Hall. The concert series has drawn comparisons with pianist Myra Hess’s wartime recitals at the National Gallery on Trafalgar Square, which were seen as morale boosters and acts of defiance as bombs fell on London.

“The first concert, the emotion around that, the amount of people crying when Stephen Hough did his own arrangement of the Bach/Gounod Ave Maria as the encore. That was tough and it felt like there was kind of a generator going. You know, you could feel the tension in the hall even though the hall was totally silent. We knew all these people were tuning in but we didn’t know how many and we didn’t know the impact at that stage,” he said.

Gilhooly, whose brother Owen is a professional singer who teaches at the Royal Irish Academy of Music in Dublin, comes from a musical family in Castleconnell, Co Limerick. He credits his music teacher Jean Holmes and John Ruddock, headmaster at Villiers School in Limerick, with his introduction to music at the highest level.

Ruddock, who was friendly with William Lyne, Gilhooly’s predecessor at Wigmore Hall, brought international musicians to perform at the school and at the age of 10 or 11, Gilhooly was seeing and meeting some of the performers he works with today. A student of history and politics at University College Dublin, Gilhooly trained as a tenor under Veronica Dunne but decided in his early 20s that, although he had a very good voice, he didn’t like being in front of an audience.

He joined Wigmore Hall as chief executive in 2000, succeeding Lyne as director in 2005 to become a leading figure in Britain’s music world. He has expanded the hall’s outreach to diverse communities across London, running programmes for young offenders and lowering its audience age profile by offering cheap tickets to those under 35.

The hall closed, along with London’s other classical music venues, in the middle of March but when Gilhooly was watching a livestream of Mass from on St James’s Church on Spanish Place on Easter Sunday, he saw they had a priest, an organist and a singer.

Since the concert season started at the beginning of June, Gilhooly has been up at 5am every day, pitching in with cleaning and ensuring that social distancing guidelines are respected. The camera in the hall is operated remotely from the bar downstairs, where Gilhooly has set up sound and vision desks and other members of the team are working from home.

“We actually have the son of one of our staff who’s an undergraduate at Cardiff in music and composition who is reading the score and calling camera shots from Kent. It’s unbelievable,” he said.

At the end of Friday’s concert, Gilhooly will make a statement affirming the central role the arts can play in the economic recovery from the coronavirus crisis and asserting the right of every citizen to access the arts and culture.

He hopes to stage another series of concerts in September, this time with an audience of perhaps 30 or 40 in the hall. But he hopes the lockdown concerts have already served to confirm Wigmore Hall’s role as a national concert hall for Britain, even though it is a chamber hall.

“It’s a tiny little port of call, but an essential place where musicians have come to earn their chamber music and recital credentials and then reinforce them. Through the power of music at the highest level, we can reach people in every demographic,” he said.

“And it’s been a way of showing the government what we’re worth without having to scream about it. The music speaks for itself.”