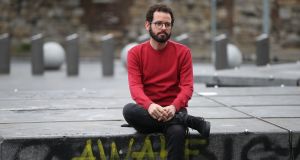 Fabio Oliveira: ‘It’s not fair considering what we paid for. As a teacher in Brazil I know that online classes require not only a good internet connection but a suitable place where students can work without interruption.’ Photograph: Nick Bradshaw

Fabio Oliveira was working as a chef in a Dublin cafe when the country went into lockdown in March. A few days after the restrictions were announced, he got a call from his boss.

“He told me he wouldn’t be able to reopen the cafe. He was very kind and explained how I could apply for the benefit from the Government. But I was lucky with him. I had to share this information with my friends who didn’t realise they were eligible for support.

“People were so nervous at the time because they’d lost their jobs and didn’t know what would happen next. They didn’t know how they could pay their bills.”

A lecturer in philosophy from Rio de Janeiro, Oliveira came to Ireland last November to improve his English. He is now one of the thousands of Brazilian students in Ireland taking English language classes online.

Participating in an online class is almost impossible when you share a room with others and have a poor broadband connection, says Oliveira.

“It’s not fair considering what we paid for. As a teacher in Brazil I know that online classes require not only a good internet connection but a suitable place to participate where students can work without interruption.

“Today I attended a class with 25 people and most of them can’t turn on the microphone because there’s so much noise in the house. They can’t practice speaking English, only writing.”

In late May, the then minister for justice, Charlie Flanagan, announced that language students who had completed their maximum two years of classes but were unable to return home because of the pandemic could stay in Ireland until the end of the year, provided they re-enrolled in an online course.

The Irish Council for International Students (ICOS) said it was “deeply concerned” students were being forced to enrol in poorly conducted online classes. The group also criticised English language schools for not lowering their fees or providing refunds.

On June 8th, a virtual online protest was held highlighting the “injustice of paying for online classes at the same price as face-to-face classes” and calling for students to be allowed to work 40 hours per week during term time rather than just during holidays.

Online learning is just one of many challenges facing young Brazilians living in Ireland during the pandemic. Some of those who arrived just before lockdown failed to secure a PPS number in time and so were unable to either take up employment or apply for the Covid-19 payment. Others live in fear of contracting the virus in the often overcrowded houses where they live with other students.

According to the census, Brazilians are the youngest cohort of foreign nationals living in Ireland with an average age of 29.9 years. Only 10 per cent are aged over 40.

Nearly a fifth of Brazilians work in accommodation and food services, nearly four times the proportion of Irish people working in the same industry.

Many of these have suffered badly during the pandemic, says Rodrigo Souza, who has lived here for seven years.

A tech worker, Souza says Brazilians working in technology are often hired through third-party companies and do not enjoy the same rights as those working directly with large organisations. Thirty people were fired from Souza’s company in Ireland after the country went into lockdown.

A lot of younger Brazilians have survived during the pandemic by working informally, says Souza, who is a member of the Brazilian Left Front, an organisation of Brazilians in Ireland fighting for social justice. “Many of them are delivering food. The rickshaw drivers even moved into delivery. This puts them in a more vulnerable health position but they have to keep working; they need the payment.”

Brazilians are more inclined to stay in Ireland during the pandemic having seen the chaos unfolding in their own country, says Souza. “Many Brazilian students quit their jobs before coming here, they probably used their life savings to pay for their classes. Some students living in overcrowded accommodation are facing eviction. There’s a lot of uncertainty for them.”

For Oliveira, the plan is to stay in Ireland for now and keep working on his English. He feels frustrated being cooped up at home and recently started venturing out to the supermarket despite his health concerns.

“I live with Brazilians and speak Portuguese all the time. After these three months, I feel like I’m living in a mini-Brazil.”