Coronavirus: Eleven new cases and no further deaths reported in the Republic

No additional deaths reported either in Northern Ireland 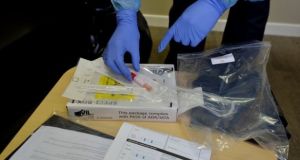 The total number of deaths from the virus is now 1,738 in the Republic. Photograph: Alan Betson

There have been no further deaths of people diagnosed with Covid-19 reported by the National Public Health Emergency Team on Wednesday.

No deaths were reported on three of the past four days, Tuesday being the exception when one death was reported.

The total number of deaths from the virus is now 1,738 after validation of data at the Health Protection Surveillance Centre (HPSC) resulted in the denotification of four deaths.

Nphet however reported another 11 new confirmed cases of the virus, bringing the total number of cases in the Republic to 25,542.

There are currently 12 confirmed cases in hospital, nine of which are in intensive care. There have been no new admissions to hospital or ICU in the past 24 hours, while three people have been discharged from hospital.

Overall, a total of 3,313 people have been hospitalised with the virus, while 436 have required treatment in ICU.

A total of 8,251 healthcare workers have been infected. The latest data also shows there have been 1,860 clusters of infection.

Some 65 per cent of cases have involved close contact with an infected person, while exactly one third of transmissions have been in the community. A further 2 per cent have been associated with overseas travel.

The HSE said it is working to identify any contacts the new patients may have had to provide them with information and advice to prevent further spread.

Dr Ronan Glynn, acting chief medical officer at the Department of Health, said a key element of the response to Covid-19 is ensuring that any person experiencing symptoms such as cough, shortness of breath, fever, loss of sense of smell or taste comes forward for testing.

“Please do not adopt a wait-and-see approach. Instead, isolate yourself and contact your GP without delay,” he said.

The National Public Health Emergency Team meets again on Thursday to continue its review of Ireland’s response to Covid-19.

Meanwhile no further coronavirus-related deaths were reported in the North on Wednesday, according to the Department of Health.

The total number of fatalities in Northern Ireland remains at 554.

Four people tested positive for the virus in the last 24 hours, out of 808 people who were tested. The number of cases identified in the North since the beginning of the outbreak stands at 5,765.