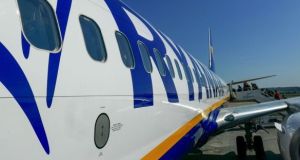 More than 50 countries are on the exemption list, including other European destinations such as Germany and Italy, but not the United States or China. Photograph: Nicolas Economou/NurPhoto via Getty

People arriving in Northern Ireland from “low to medium risk” countries will no longer have to self-isolate for 14 days.

The amendment to the international travel regulations was agreed at a meeting of the Northern Executive on Thursday, and could come into force as early as Friday.

The North’s first minister, Arlene Foster, said the list of countries included in the exemption would be the same as those in England and Wales, which applies from July 10th.

“That includes countries like Spain, like France, so that people can go on their holidays and not have to quarantine when they come back to Northern Ireland, ” Ms Foster said.

More than 50 countries are on the exemption list, including other European destinations such as Germany and Italy, but not the United States or China.

The Common Travel Area has always been exempt from the self-isolation requirement, and there is no restriction on travel within the island of Ireland.

Face coverings on public transport will be mandatory from July 10th, except where an exemption applies.

The head of Belfast International Airport, Graham Keddie, said it helped to “bring clarity” to the industry.

“Air connectivity is essential for business and tourism and we thank the Executive for moving swiftly to bring us into line with England,” he said.

There have been no coronavirus-related deaths recorded in Northern Ireland for the past six days, and the number of fatalities related to Covid-19 remains at 554.

The Department of Health (DoH) said on Thursday that three new cases of the virus had been identified in the past 24 hours, bringing the total number of confirmed cases in the North to 5,768.

The DoH said on Thursday that the Reproductive - or R - number of the virus in Northern Ireland had risen slightly in the past week, and was now between 0.5 and one.

However it noted that “as the number of new cases is low and in the presence of a robust testing programme and test/trace/protect strategy, R is no longer regarded as the most important indicator for the purposes of policy decisions.”

The department said that the number of positive tests per day was likely to be more important for planning, as at present it will “show a high degree of volatility and may be heavily influenced by small changes in numbers, and therefore may give a misleading impression of the state of the epidemic.”

On Thursday ministers also confirmed further easing of the coronavirus restrictions in the North.

Outdoor horse racing and equestrian competitions can resume from July 11th, as can outdoor competitive games and sporting events. However no spectators will be allowed.

Indoor weddings and baptisms will resume in Northern Ireland from July 10th, as will marriage and civil partnership ceremonies in local government offices and other indoor locations. Numbers attending will be determined by each venue.

Libraries can reopen from July 16th, with social distancing protocols put in place, and the date for repening indoor sport and leisure facilities - excluding swimming pools - has been brought forward to July 17th.