Ghislaine Maxwell to appear in court on bail application 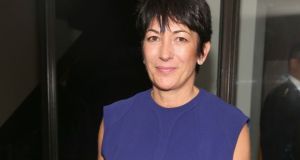 US prosecutors have asked a New York judge to schedule a court appearance on Friday for Ghislaine Maxwell, authorities said. Photograph: Sylvain Gaboury/Patrick McMullan via Getty

US prosecutors have asked a New York judge to schedule a court appearance on Friday for Ghislaine Maxwell, authorities said.

The British socialite has been accused by many women of helping procure underage sex partners for Jeffrey Epstein and was arrested last week in New Hampshire.

Prosecutors said in a letter that the defence lawyer for Ms Maxwell, who has been detained without bail after agreeing to be moved to New York, would like a bail hearing on Friday after written arguments are submitted by both sides.

An indictment made public last week said Ms Maxwell facilitated Epstein’s crimes by “helping Epstein to recruit, groom, and ultimately abuse” girls as young as 14-years-old. It also said she participated in the sexual abuse.

Epstein killed himself in a federal detention centre in New York last summer while awaiting trial on sex trafficking charges.

Meanwhile, The Daily Telegraph reported on the weekend that Ms Maxwell had a private tour of Buckingham Palace organised by the duke of York and sat on a throne.

Maxwell has previously repeatedly denied wrongdoing and called some of the claims against her “absolute rubbish”.

Among the most sensational accusations was a claim by one Epstein victim, Virginia Roberts Giuffre, that Maxwell arranged for her to have sex with the duke at her London townhouse.

The duke has denied her story.

A source close to the duke said he is “bewildered” by claims made by US authorities that he has not offered to co-operate with the Epstein case.

It comes after Audrey Strauss, acting US attorney for the southern district of New York, told a press conference that authorities would “welcome” a statement from the duke in relation to the investigation. – AP