Speculation grows that ‘fire’ may have been deliberate attack on facility 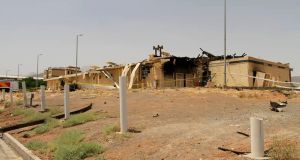 A building after it was damaged by a fire at the Natanz uranium enrichment facility, some 322km south of Iran’s capital Tehran. Photograph: Atomic Energy Organization of Iran via AP

Iran has admitted an incident at one of its main nuclear sites last week caused major damage and could slow down the country’s production of advanced centrifuges, technology Israel and the US see as a threat, intensifying suspicions there may have been a deliberate attack on the facility.

Newly released satellite imagery showed the damage from what Iranian authorities attributed to a fire at the Natanz nuclear facility was far more extensive that previously disclosed.

A satellite picture published by the London-based Iranian news outlet Iran International shows most of the building where Thursday morning’s incident occurred blown away and blackened by scorch marks, and debris scattered around the perimeter, indicating a large explosion.

Iranian authorities first said a fire broke out in an “industrial shed” at its Natanz nuclear enrichment facility in central Isfahan province, but US and European analysts said it appeared to be a site where advanced centrifuges – devices that spin at extreme speed to turn uranium into nuclear fuel – were under development.

Behrouz Kamalvandi, a spokesman for the Atomic Energy Organization of Iran, appeared to confirm that theory on Sunday, telling the state-run Islamic Republic News Agency that the fire could slow down Tehran’s development and production of advanced centrifuges in the medium term, and that Iran would replace the damaged building with a bigger one that had more advanced equipment.

The US secretary of state, Mike Pompeo, told the UN Security Council last Tuesday that Iran’s advanced centrifuges would allow the country to enrich uranium up to 50 times faster than it currently can.

The Natanz incident was followed by two more apparent industrial accidents on Saturday, which along with fires and explosions at other sites have fuelled speculation that the country is being targeted by an organised, state-sponsored sabotage campaign.

Israeli cabinet officials spoke publicly for the first time on Sunday about the rumours. Neither the defence minister, Benny Gantz, nor the foreign minister, Gabi Ashkenazi, confirmed any Israeli role, including in the latest fire at a power plant in the southwest of the country on Saturday. But their careful statements did little to douse suspicions that at least some incidents were not accidents.

“Not every incident that happens in Iran is necessarily connected to us,” Mr Gantz told Israel Radio on Sunday morning. “All those systems are complex, they have very high safety constraints and I’m not sure [the Iranians] always know how to maintain them.”

Asked about Natanz, Mr Ashkenazi told a forum in Jerusalem that Israel had a long-term policy not to allow Iran to obtain nuclear weapons, adding: “It is better not to mention our actions in Iran.”

Analysts said it was likely that at least some of the incidents were accidents caused by poor maintenance of infrastructure. But at least two incidents occurred at strategic sites: an explosion on June 26th at a suspected missile production facility east of Tehran, and the Natanz fire or blast.

On Sunday, Iran’s Revolutionary Guards Navy chief said Tehran has built underground “missile cities” along the Gulf coastline. Rear Admiral Ali Reza Tangsiri told the Sobh-e Sadeq weekly: “Iran has established underground onshore and offshore missile cities all along the coasts of the Persian Gulf and the Gulf of Oman that would be a nightmare for Iran’s enemies.”

After the Trump administration pulled out of a nuclear agreement with Iran and other countries in May 2018 and reimposed sanctions on the Iranian economy, Tehran announced it was developing advanced centrifuges able to enrich uranium to weapons-grade levels more quickly – though international inspectors say it has stopped short of producing any such fuel.

Damage to the Natanz site would probably have set back work on the new generation of centrifuges “quite a bit”, said Fabian Hinz, a research associate at the James Martin Centre for Nonproliferation Studies in California. “Assembling, balancing, calibrating and testing centrifuges is a really complex process that needs specialised equipment, so [the damage] will definitely delay their work,” he said.

Keyvan Khosravi, a spokesman for Iran’s national security council, told a state media outlet on Friday that experts had “determined the main cause of the incident” and would declare it “in due course for security reasons”.

‘Cheetahs of the Homeland’

Journalists from the BBC’s Farsi service said they received a statement before the damage was publicised in which a group calling itself “Cheetahs of the Homeland”, made up of disaffected Iranians inside the defence establishment, claimed to be responsible.

Asked on Thursday evening about Natanz and the other incidents, Israel’s prime minister, Binyamin Netanyahu, said: “Clearly we can’t get into that.”

The Natanz site was first targeted in 2007 by a cyber-warfare campaign known as Olympic Games that included the use of the Stuxnet computer virus, which scrambled code and led to the destruction of at least hundreds of centrifuges, among other damage. Israel and the US were thought to be the architects of the operation.

Israel claims to have foiled a large-scale cyber-attack this year involving an attempt to damage and possibly infect parts of the country’s water supply, according to Yigal Unna, the director general of the Israel National Cyber Directorate.

He did not name Iran as a suspect, but said in May: “If [the attack] had been successful, and fortunately we managed to foil it, and to prevent it, but if the bad guys would have succeeded in their plot, we were now facing, in the middle of the corona crisis, a very big damage to the civilian population, a lack of water and even worse than that.” – Guardian