Glory to Hong Kong, deemed to contain ‘strong political messages’, can no longer be sung or played 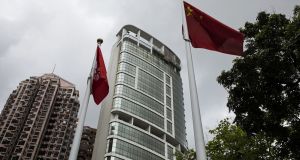 The flags of China (right) and the Hong Kong special administrative region are flown near the new national security office in Hong Kong on Wednesday. Photograph: Chan Long Hei/Bloomberg

Hong Kong officials on Wednesday banned school students from singing Glory to Hong Kong, the unofficial anthem of the protest movement, on the same day Beijing opened its new national security agency in the city.

Intelligence agents from mainland China will be operating openly in Hong Kong for the first time in the new bureau, with the power to launch investigations into a wide range of crimes under a highly controversial new national security law that Beijing imposed on the city last week.

The new offices – in a high-rise hotel that was converted in a matter of days – are in the bustling district of Causeway Bay and overlook Victoria Park, a popular venue for pro-democracy protest rallies and the starting point of many mass marches over the past year.

Just hours after the Chinese flag was raised at the opening ceremony of the new security bureau, education secretary Kevin Yeung said in the legislative council that schools must not allow their students to play, sing or broadcast any songs that will “disrupt the normal operation of schools, affect students’ emotions or contain political messages”.

“Playing and singing songs, which cover a wide range of topics, are one of the ways for people to express their thoughts and feelings,” he said, adding that students should also not be permitted to chant slogans, form human chains or arrange class boycotts.

He cited the protest anthem Glory to Hong Kong as an example of a song that “originated from the social incidents” last year and “contains strong political messages”, so students must not sing, play or broadcast it in schools.

About 1,600 of the 9,000 pro-democracy protesters who were arrested in Hong Kong over the past year were school students, officials said.

The sweeping new legislation criminalises what Beijing broadly defines as secession, subversion, terrorism and collusion with foreign forces – a law Hong Kong and Chinese officials say was necessary to bring stability to the former British colony that was rocked by months of pro-democracy, anti-China protests.

Beijing will have jurisdiction over cases it considers to be serious, a provision that dismantles the legal partition that was in place between the Communist party-controlled system in mainland China and the western-style judiciary in place in Hong Kong.

Since the new law came into force last week, pro-democracy books have been removed from public libraries, chanting slogans and carrying pro-independence flags have been outlawed and authorities have moved to tighten control of the internet.

Critics say the law is a blunt implement aimed at crushing all signs of dissent and revoking the city’s cherished freedoms guaranteed under the handover agreement when China regained sovereignty over the city in 1997.