Distance from native land, gender roles and lack of translation add to vulnerabilities 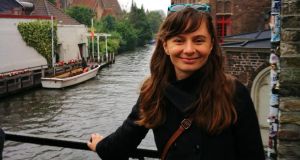 Ruta Ramanauskaite: “More than ever people need to call their banks or doctors, and translators could help ease these stresses which are enormous.”

Lithuanian Ruta Ramanauskaite immediately translated a news article about the implications of the State’s Covid-19 lockdown within minutes of Leo Varadkar’s Washington declaration in mid-March.

It was to be the first of many translations for her mother, Alma, as more and more restrictions were introduced and fears grew about the threat that Covid-19 posed.

Alma Ramanauskaite speaks some English but struggles to follow the complicated terminology used in the daily Health Service Executive briefings or news reports. “I attended English language courses before I came to Ireland but I’m outside my comfort zone in this situation,” she explains through her daughter who translates into English.

“Not understanding makes her even more vulnerable,” says her daughter, who has lived and worked in Ireland for more than a decade. “I’m 32 and a lot of my age group would provide the same support to their parents and immediate friends.”

Ruta used to work as a translator in hospitals, the courts and Garda stations. “Given we have such a wide range of nationalities in this country, this service should be more available to people. More than ever people need to call their banks or doctors, and translators could help ease these stresses which are enormous.”

Alma feels lucky to have support from her two daughters, but, like everyone, finds it difficult not being able to hug her children.

“Sometimes I feel quite lonely, I don’t have anyone to speak to,” says Alma who lost her job in a factory shortly after the virus outbreak. “We spent Easter apart and we couldn’t see each other on Lithuanian mother’s day. We’d usually spent these sunny weekends together.”

Ruta is worried about her mother’s job prospects following the pandemic.

“Her colleague told her there was a meeting where they discussed shutting down but there’s been no official letter.”

The reality or threat of unemployment hangs over many of the 36,500 Lithuanians living in Ireland. Like everyone else, they have struggled to care for their children while working from home, says psychologist Violeta Mooney.

Mooney is one of the more than 100 skilled Lithuanians who responded to an appeal from her country’s embassy in Ireland for volunteers to join a support network during the health crisis. Since March, she has provided reassurance and guidance over the phone to members of the Lithuanian community.

Like Alma, many older Lithuanians feel isolated and alone, says Mooney. “They ask me ‘what will happen if I get sick, who will help me?’ They are living by themselves and don’t have family to help.”

Many older Lithuanians come to Ireland for short breaks to help care for their grandchildren. Those who came in March got stuck here because of the lockdown. “I had calls from families who could see their parents getting stressed about cancelled flights. They worried about how much they were struggling.”

Like Irish people living abroad, Lithuanians in Ireland have been unable to travel home if a family member or friend dies. “People don’t have the space and support to grieve and express their emotions. That final goodbye of being at the funeral gives people a sense of closure. You need that hand on your shoulder, that human closeness, especially when your heart is broken.”

Some younger Lithuanians, who recently arrived in the country and lost their jobs because of the pandemic, have contacted the phone line desperately seeking help to get home, says Mooney.

Lithuanian men in Ireland are psychologically struggling more than women. “Whether we like it or not, the traditional roles still exist with men feeling they should be at work. Suddenly they’re at home 24 hours a day with children demanding a lot of attention. That’s more difficult for men than women.” However, she has also received calls from distressed women suffering domestic abuse.

More translations of restrictions would be useful for members of the Lithuanian community. There are many who are still very confused about cancelled hospital appointments, she says.

Eglé Sakalauskiene, who works at the Lithuanian embassy, says they have received numerous requests from people seeking assistance with language barriers. A small number have also sought advice on returning to Lithuania.

“We had some people who were about to move back and then got stuck here because their flights were cancelled. But at the moment nobody can do anything, we all just have to wait. Even those in the hospitality and construction sectors who lost their jobs have to wait to see what the situation will be like after Covid. There is worry and concern but people aren’t panicking. I think people are hopeful.”