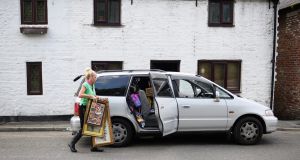 A resident rushes to remove items from a house after being evacuated from the town below Toddbrook reservoir. Photograph: Leon Neal/Getty Images

Evacuated residents of a Derbyshire town in England have been allowed briefly back to their homes as emergency services continue efforts to prevent a damaged dam collapsing ahead of more bad weather.

Water levels at the Toddbrook Reservoir in Whaley Bridge have been reduced by half a metre since Thursday but the damage to the 180-year-old structure remains at a “critical level”.

On Saturday, residents were allowed into their homes for periods of about 15 minutes to collect essentials, but were warned they would be doing so at their own risk.

The British government warned there was still a threat to life in the town ahead of more bad weather on Sunday, when a Met Office yellow weather warning is in place for much of northern England and the midlands, including the area around the reservoir.

Police officers signed people in and out of Buxton Road as they drove through a roadblock to return home.

‘I thought it was a bomb’

Joan Pass, 78, was in tears after she went back for the first time since about 1,000 residents were evacuated from the town following the damage to the dam.

She said: “It was terrible. The helicopter was coming over. You see pictures on the television but when you come home it all seems real.”

Mrs Pass, whose daughter’s home was damaged by flooding in nearby Kettleshulme on Wednesday, said she had to get out of her home within about 10 minutes when the alarm was raised.

Tracey Coleman, who was returning to her home just outside the road closures in the area, said she, her 18-year-old daughter Anna and the rest of the family left on Thursday with their two dogs, a cat, a tortoise and the neighbour’s dog and went to her mother’s house nearby.

She said: “We just took some medication, the animals and a bit of food.”

Deputy chief fire officer of Derbyshire fire and rescue service Gavin Tomlinson said crews had worked through the night to build pumps to lower the water level of the reservoir.

He said: “We are hoping the weather will be kind to us, but everyone is working as hard as possible to get ahead of the curve and remove as much water as possible today, overnight and into tomorrow, to minimise the impact of any bad weather that does materialise.”

Labour MP for High Peak Ruth George said she had written to prime minister Boris Johnson, who visited the area on Friday.

She said: “It’s not just about the emergency situation – Whaley Bridge as a town needs to be able to feel safe and we need to know what the options are.”

She said residents had been “absolutely brilliant” at dealing with the crisis.

Ms George added: “We’re expecting lots and lots of rain over the next few days so I can quite understand the authorities not being prepared to say it’s safe until those storms have gone.”

Joiner Adam Lindsey, 23, had been back to the town to collect essential medication from the house.

Police have warned it could be several days before residents can return to their homes permanently.

Mr Johnson promised that the damaged reservoir would have a “major rebuild” as he met locals at nearby Chapel-en-le-Frith high school, which is being used as an evacuation centre, on Friday.

Describing the damage to the dam as “pretty scary”, he said: “The plan is to try and stop the dam breaking, clearly. And so a huge amount of effort is going into that.”

An RAF Chinook and around 150 firefighters using high-volume pumps appear to have partly stabilised the reservoir’s spillway, with further pumps brought in by officials on Friday.

Environment minister Therese Coffey warned that the situation remained in a “critical stage” on Saturday as she issued a message to residents.

She told BBC Radio 4’s Today programme: “Of course this is a distressing and worrying time for them, but if that dam were to breach it would lead to a loss of life if there were people there. There’s no doubt about that.”

The reservoir is on the north-west edge of the Peak District National Park and was built in 1831, according to experts, although the Environment Agency records it as being built in 1840-41. – PA