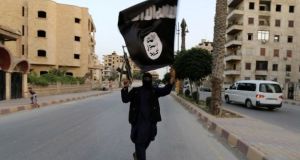 The authors raise concerns about up to 30,000 foreigners who travelled to the “caliphate” to fight and who may still be alive. Photograph: Reuters

The United Nations has warned that a recent pause in international terrorist violence may soon end, with a new wave of attacks possible before the end of the year.

In a report, specialist monitors at the UN security council paint a worrying picture of a global Islamist extremist movement that continues to pose a significant threat despite recent setbacks.

The authors raise concerns about up to 30,000 foreigners who travelled to the “caliphate” to fight and who may still be alive.

“Their future prospects will be of international concern for the foreseeable future,” the report says. “Some may join al-Qaeda or other terrorist brands that may emerge. Some will become leaders or radicalisers.”

The report is based on information supplied by intelligence agencies of UN member states, and provides a glimpse of collective thinking among security services around the world.

It notes that, though the geographical caliphate of Islamic State has ceased to exist, member states agree many of the underlying factors that gave rise to Islamic State [also known as Isis] still exist, which suggests that the threat from it and al-Qaeda, or similar groups is unlikely to decline further.

Though there have been fewer successful attacks since 2015 and 2016, when extremists killed hundreds of people in France, Belgium and Germany, the threat to Europe “remains high”.

A major concern is the radicalisation of prison “inmates afflicted by poverty, marginalisation, frustration, low self-esteem and violence”. A further challenge is the imminent release of some of the first wave of returnees to be imprisoned after returning from Islamic State’s caliphate, which was established across a swath of land in Iraq and Syria in 2014.

“Deradicalisation programmes have not proven to be fully effective . The most combat-hardened fighters serving longer sentences are not yet approaching release from prison. They remain dangerous and continue to pose a challenge both inside and outside the penal system,” the report notes.

European states estimate that as many as 6,000 of their citizens travelled to Iraq and Syria to join Isis or other extremist groups. About a third were killed, while another third remain detained in the region or have travelled elsewhere.

Two thousand or more may have returned to Europe, the report says.

The challenge posed by dependants of foreign terrorist fighters living in overcrowded displacement camps in Syria where US-backed militia are holding thousands of militants and their family members is also significant.

Isis members brought a large number of children into territories run by the group or bore babies who are now orphaned, destitute or even stateless, and whose future is uncertain.

Western countries have so far been unwilling to take back citizens who went to Syria to join Islamic State - seeing them as a security risk if they return home but knowing they may be unable to prosecute them.

According to the report, Isis has access to between €50million and €270million remaining from the revenues of the caliphate and is using propaganda to maintain the group’s reputation as the leading global terrorist brand - the “virtual caliphate”.

“When it has the time and space to reinvest in an external operations capability, Islamic State will direct and facilitate international attacks in addition to the Isis-inspired attacks that continue to occur in many locations around the world. The current abatement of such attacks, therefore, may not last long, possibly not even until the end of 2019.”

The report says Isis leaders did not have advanced knowledge about bloody attacks on churches and hotels in Sri Lanka.

“It was a locally instigated and led attack inspired by Islamic State ideology. The bombings aimed to boost the global image of Isis after its military defeat in Iraq and the Syrian Arab Republic.

The report notes that al-Qaeda remains resilient, but points out that the health of its 68-year-old leader, Ayman al-Zawahiri is poor.

Officials in the US confirmed this week that Hamza bin Laden, a son of Osama bin Laden, the founder of the organisation, was killed within the last two years. Hamza, 30, was being groomed as a possible leader of al-Qaeda.

A major part of the report is devoted to west Africa, which has seen a sharp rise in violence motivated by Islamic militants.

Intelligence services appear divided over whether the newly established Isis affiliate in central Africa, based in the east of the Democratic Republic of Congo posed a genuine threat or had any substantial links to the main group.

Some central African states expressed concerns that the group might evolve, attract returning and relocating foreign terrorist fighters and establish links with other Isis affiliates operating in Africa. But other services said the claims were “opportunistic”. – Guardian