ASAP Rocky back in US amid Swedish assault case 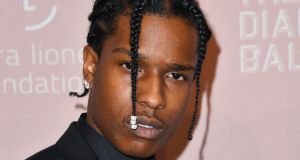 The Stockholm district court said US rapper A$AP Rocky should be released from custody, pending the verdict of an assault trial that has garnered global attention and stirred fan outrage. Photograph: Angela Weiss/AFP/Getty Images

Rapper ASAP Rocky is back in the United States as the verdict in a Swedish assault case against him and two other Americans looms.

Local TV stations reported that the American artist was among a group of people shown emerging from a private plane at Los Angeles International Airport on Friday night.

They are accused of beating 19-year-old Mustafa Jafari on June 30th outside a fast food restaurant in Stockholm.

The rapper pleaded not guilty, saying he acted in self-defence. He had been jailed since his July 3rd arrest. – AP