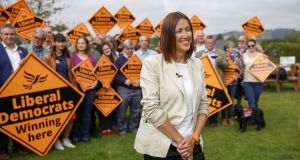 The Liberal Democrats have promised to consider further alliances with other anti-Brexit parties after a byelection victory in Brecon and Radnorshire that cut Boris Johnson’s Commons working majority to one. Jane Dodds overturned a Conservative majority of more than 8,000 to capture the seat after the Greens and Plaid Cymru agreed to step aside.

Liberal Democrat leader Jo Swinson thanked the two smaller parties for agreeing not to split the anti-Brexit vote and said she was open to similar electoral pacts in the future.

“In most constituencies across the country it will be the Liberal Democrats that are the strongest party of remain but we recognise the value in co-operating with others for that wider national goal to protect our country’s future. I think this may well be a feature of future elections. We need to be grown up about that. Grown-up co-operation across parties with the national interest will continue,” she told the BBC.

The byelection leaves the Conservatives and the Democratic Unionist Party (DUP) with 319 seats and opposition parties and Independents with 318. The total does not include Sinn Féin’s seven MPs, who do not take their seats at Westminster, or the speaker and three deputy speakers, who do not vote.

Dover MP Charlie Elphicke is suspended from the Conservatives as he faces sexual assault charges but he continues to vote with the government.

The Brecon and Radnorshire byelection was triggered by a recall vote following Conservative Chris Davies’s conviction for submitting false expenses. Mr Davies, a Eurosceptic who won the seat in 2015 and increased his majority in 2017, was reselected to contest the seat for the Conservatives.

He won 39 per cent of the vote, behind Ms Dodds’s 43.5 per cent. Nigel Farage’s Brexit Party came in third place with 10.5 per cent with Labour in fourth place on just 5.3 per cent.

“It’s disappointing to lose a parliamentary colleague, obviously. But what we saw here was a very close result in a byelection which the Lib Dems were expecting to romp home comfortably,” he told the BBC.

“What we also saw was the Labour Party, the official opposition, the party that claims to be ready to step in, almost losing their deposit well in Wales. They moved backwards.”

The Brexit Party’s 3,331 votes were more than twice the size of the Liberal Democrats’ winning majority and Conservative Eurosceptic Steve Baker on Friday appealed to Mr Farage not to split the pro-Brexit vote.

“It is becoming obvious to all now that the Brexit Party standing against the Conservative Party would produce a massive own goal,” he said.

Mr Johnson has ruled out an electoral pact with the Brexit Party, promising during the Conservative leadership campaign to put Mr Farage “back in his box”.

Mr Johnson’s first byelection defeat as prime minister came as Bank of England governor Mark Carney warned against denying the economic challenges posed by a no-deal Brexit. Mr Carney said leaving the EU without a deal could lead to a further fall in sterling, higher prices and businesses being no longer viable.

“It is also not helpful to deny that shifting from the most integrated economic relationship in the world, which is being a member of the European Union, to a new relationship which is potentially just a WTO relationship, that that would not – if we move overnight to that – that would not have an effect on the economy.”