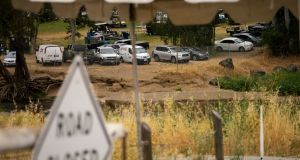 The gunman who opened fire at a California food festival killed himself after officers shot him multiple times, officials have said.

This corrects previous police accounts that the officers fired the fatal bullet.

Authorities say they have not yet been able to determine his motive.

Gilroy Police Chief Scot Smithee told reporters that the timeline remains the same: Three veteran police officers responded in less than a minute and fired multiple rounds when Legan turned his AK-47-style semi-automatic rifle on them.

Mr Smithee said the officers hit him multiple times and he fell to the ground with the rifle.

“He was able to get one more round off, and he was able to shoot himself in the head,” the police chief said.

Mr Smithee said he was “a little surprised” to hear that Legan had shot himself.

“I don’t think that changes anything about the heroics of our officers,” he added.

The chief did not know how many times police fired at him, or how many bullets struck him. A full coroner’s report is pending.

Legan killed six-year-old Stephen Romero and 13-year-old Keyla Salazar of San Jose, along with Trevor Irby (25) of Romulus, New York, on the last day of the long-running festival.

It draws more than 100,000 people with music, food booths and cooking classes to the city roughly 80 miles south-east of San Francisco.

John Bennett, the FBI’s special agent in charge in San Francisco, has said Legan did not appear to be targeting a particular group and that he did not seem to follow a specific ideology.

Officials say their investigation has not shown that anyone else was involved. – AP