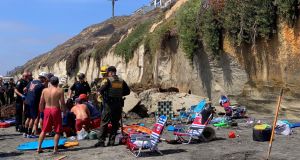 Three people have died and two more were injured after a cliff collapsed onto a popular southern California beach.

The area is popular with local residents, surfers and holidaymakers.

A woman died at the scene, and two other people died in hospital.

A fourth person remains in hospital, while a fifth suffered minor injuries.

The beach was filled with people at the time of the collapse. A KNSD-TV helicopter captured footage of beach chairs, towels, surf boards and beach toys strewn about the sand.

A 9m by 7.6m section of the bluff located about 4.5m above the beach gave way, dumping rock and sand onto the people below.

Several victims had to be dug out of the mound.

The bluff remains unstable and the area was closed. Homes on top of the cliff are not in any danger, Encinitas fire chief Mike Stein said.

At one point, dogs were brought in to search for additional victims, but by late Friday night none had been found.

A loader has been brought in to clear away the heavy debris.

Bluffs give way four to eight times a year in southern California, but the area usually suffers “nothing of this magnitude”, according to Brian Ketterer, southern field division chief of California State Parks.

“There’s really no rhyme or reason, but that’s what it does naturally.

“This is what it does, and this is how are beaches are actually partially made. It actually has these failures.”

Suburbs north of San Diego have contended with rising water levels in the Pacific Ocean, pressuring bluffs along the coast. Some bluffs are fortified with concrete walls to prevent multimillion-dollar homes from falling into the sea.

The collapse occurred near Grandview Beach. It is fairly narrow, with tides high this week.

Long stretches of beach in Encinitas are narrow strips of sand between stiff waves and towering rock walls. People lounging on beach chairs or blankets are sometimes surprised as waves roll past them and within a few feet of the walls.

Some areas are only accessible by steep wooden stairs that descend from neighbourhoods atop the cliffs. – Associated Press