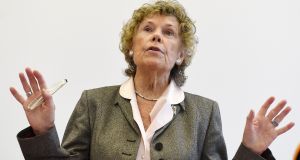 Labour MP Kate Hoey: has consistently voted with the government to stop efforts for a soft Brexit or to oppose no deal. Photograph: Andy Rain/EPA

The Brexit-backing, Antrim-born Labour MP Kate Hoey has announced she will stand down at the next election in her ultra-remain constituency of Vauxhall.

Ms Hoey, who has consistently voted with the government to stop efforts for a soft Brexit or to oppose no deal, was subject to a no-confidence vote last summer in her inner-city London constituency, where 77.6 per cent of voters backed remain in the 2016 referendum.

At the time, Ms Hoey, who has represented Vauxhall since 1989, said she would not let it change the way she acted in parliament.

She campaigned in 2016 with Nigel Farage’s Grassroots Out, including posing with the then Ukip leader on a boat on the Thames.

Local anger grew when Ms Hoey put her name to an amendment to the customs Bill, ruling out a customs border in the Irish Sea, which was put forward by the pro-Brexit European Research Group (ERG).

She was one of four Labour MPs to support the government in defeating an amendment calling for a post-Brexit customs union.

Ms Hoey did not support Theresa May’s Brexit deal on the grounds that it was too soft.

She said in 2017 that if there is to be a hard border on the island of Ireland, Ireland will have to pay for it.

Though the no-confidence motion had no force, Ms Hoey might have faced a reselection battle in her constituency after rule changes last September made it easier for members to force a so-called trigger ballot, which would force an MP to compete against other candidates for re-selection.

The seat, which has a 20,250 Labour majority but has been targeted by the Liberal Democrats because of Ms Hoey’s Brexit views, is likely to be fiercely contested by prominent Labour figures.

Momentum’s national organiser Laura Parker is an active member of the local party and stood for Labour at the European Parliament elections but failed to be elected.

The former MP Katy Clark and the London Assembly member Florence Eshalomi have also been tipped for the seat, though Ms Eshalomi is also believed to be considering a run for Labour in Streatham, where the current MP, Chuka Umunna, has defected to the Lib Dems.

A number of other Labour MPs are expected to announce by Monday night that they are standing down at the next election, when the party’s deadline for notification passes.

Three other MPs who have either backed May’s Brexit deal or opposed efforts for a second referendum have already announced they will stand down, including Poplar and Limehouse’s Jim Fitzpatrick, Rother Valley’s Kevin Barron and Blyth Valley’s Ronnie Campbell. – Guardian