Kate Hoey: an Antrim-born MP who said Ireland should pay for Border 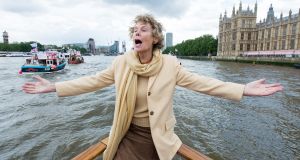 Kate Hoey showing her support for the Leave campaign aboard a boat on the Thames. She is optimistic about Brexit, which she believes will definitely happen. Photograph: Getty Images

Sky News presenter Adam Boulton is the latest British public figure to raise Irish hackles over Brexit, this time with a sharp but perfectly civil interview with Tánaiste and Minister for Foreign Affairs Simon Coveney.

When Boulton told his Irish critics on Twitter to get over themselves, the outrage multiplied.

No comment over the past few weeks has provoked more indignation, however, than Labour MP Kate Hoey’s assertion that if there is to be a hard border Ireland will have to pay for it. The pro-Brexit campaigner was compared with Donald Trump, and lampooned in newspaper columns and cartoons.

When we met in her office at Westminster last week, hours before British prime minister Theresa May finally agreed a deal on the Border with the EU, Ms Hoey had no regrets.

“Everybody’s been saying it since. All I said was, we are not putting a border up, so who’s going to put the border up? The EU. And that means the Irish Government as part of the EU, they’re going to be the ones who are putting the border up.”

She is suspicious of Taoiseach Leo Varadkar’s motives in ramping up the rhetoric on the Border since he took office, suggesting that he must know that Ireland would suffer more than any other country if the UK crashes out of the EU without a deal.

“It’s about him being a new Taoiseach and wanting to exert his difference from Enda Kenny. I mean Enda Kenny was engaged very positively in a lot of these discussions. I think things might have been very different if he had stayed on.

“What I don’t understand is why the Irish Government doesn’t accept that the United Kingdom has decided to leave. They would have preferred us not to leave, but let’s see what we can get out of this that actually will help us and benefit the whole of the islands.”

Born in 1946 on a small farm in Co Antrim, about 15 miles from Belfast, Ms Hoey grew up in a relatively poor, bookish household. Her parents were Presbyterians and unionists, but her father, who was a Labour supporter, was not a member of the Orange Order.

A talented athlete who was Northern Ireland high jump champion, Ms Hoey went to the Ulster College of Physical Education after grammar school at the Belfast Royal Academy. It was at college that she made her first Catholic friends and became interested in politics, attending debates at Queen’s where leading figures from People’s Democracy played starring roles.

“My hero in the early days was [civil rights activist] Michael Farrell because he was amazing. He was a brilliant speaker. Debates with Michael Farrell, Eamonn McCann, it was a very interesting time.”

Ms Hoey joined the International Marxist Group, a Trotskyist group which backed a united Ireland and moved to London to study economics.

“I was very against internment and I was in the Anti-Internment League here in London, and we were all arrested after they took the coffins into Downing Street.

“People’s Democracy and the civil rights movement were in the early days really about civil rights. What happened later, of course, was that it kind of got taken over by people who were not so much interested in civil rights, or once civil rights had been achieved, or a great deal of them, were more interested in getting a united Ireland. I’m British.”

Ms Hoey drifted away from far-left politics and when she joined Labour it was under Neil Kinnock, who was determined to purge the radicals from the party.

Although her politics moved to the right (she is almost alone in Labour in supporting foxhunting, as well as Brexit and Ulster unionism) she has maintained friendships with many on the left.

Always a Eurosceptic, she voted against all the Maastricht and Lisbon treaties, often joining Jeremy Corbyn among a handful of Labour rebels. She has a good relationship with Mr Corbyn, and opposed the shadow cabinet coup that tried to oust him from the leadership last year.

A member of the Northern Ireland Affairs Committee, Ms Hoey is friendly with the DUP, taking a similar line on Brexit and in defence of Northern Ireland’s place in the UK. She claims the DUP have been misunderstood by the British media.

“It’s because there’s a total lack of understanding of the pro-union community in Northern Ireland by most of the liberal media in this country and by the liberal establishment.

“And they have a pre-ordained view of what a unionist looks like. I’m pro-union, I’ll do anything to make sure that the United Kingdom has Northern Ireland as an integral part of it on the same terms as any other part of the United Kingdom when we leave the EU.”

Hoey is optimistic about Brexit, which she believes will definitely happen, and about the future of UK-Irish relations after Britain leaves the EU.

But when I ask if she feels Irish as well as British, she hesitates. “I like some Irish music, I like Daniel O’Donnell. Does that make me Irish?”

The walls in her office are covered with pictures of her with figures from sport and she is passionate about promoting sport in Northern Ireland. If Ireland are playing England at rugby, however, she will not be cheering for the team in green.

“I don’t feel that Irish thing. If the Republic of Ireland had qualified for the World Cup and Northern Ireland didn’t, I’d probably want them to do reasonably well.

“But Northern Ireland is a much smaller country and we did a little bit better than the Republic of Ireland. I wouldn’t want them necessarily to lose but I wouldn’t be out there cheering. They play under the Irish National Anthem, which is not my country. It’s another country.”